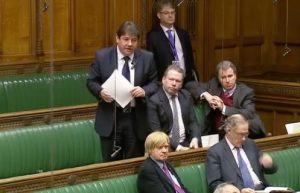 THE MP for South Basildon and East Thurrock, Stephen Metcalfe, has asked questions in the House of Commons on plans for housing in Dunton, just over the border from Thurrock.

“It is important that the Housing and Planning Minister consults more local councils on schemes like the Dunton Garden Village, announced by the Government earlier this month.

“Although the proposed garden village is formally attached to Brentwood Borough Council, it might actually have a greater effect on the Basildon and Thurrock area.

“As the plans currently stand, the development would be built right next to Basildon and West Horndon. Many local residents are concerned about new developments on green belt land and their voices should be heard in the ongoing process.”

“Through my Parliamentary question I suggested the Minister contact Basildon and Thurrock councils as a matter of urgency to gain their views on the new garden village.

“I was pleased that he said he would make more information available and he confirmed that the plans have not yet been finalised.”