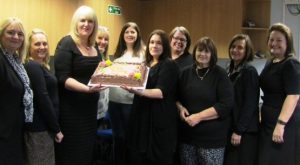 IN November 1986 Thurrock Council launched it’s Careline service, supporting the most vulnerable people in the borough.

On Wednesday (11 January) Careline staff came together at their Harty Close, Grays headquarters, to celebrate its 30th anniversary with cake and a visit from the portfolio holder, Cllr Sue Little.

The service, which is open 24 hours a day, every day of the year, currently supports over 4,000 people in Thurrock, allowing them to live independently in their own homes, secure in the knowledge the team is there if needed.

Wednesday’s celebration included two special staff members, Kim Brook-Joyce (pictured third from right with Cllr Little) and Beryl Davies, who have been working for Careline since its launch.

Cllr Little said: “Careline is a remarkable service. Over the 30 years it has dealt with over four million calls. Many people who use the service and have the emergency button in their home, owe their lives to this service and its dedicated and professional team.”

Careline works by activating the button letting the advisor know there is a problem. If their call back have no response the next of kin are informed and, if necessary, the advisor would make their way to the service user’s home.

Since its launch, the Careline service has taken on extra out-of-hours services including homelessness, environmental health, and other social services.