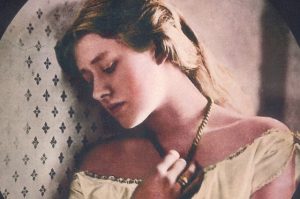 My life as a theatrical costumier by Ann Hardy

The Society welcomed back Ann Hardy for our January lecture. Ann had always wanted to be a dressmaker, following her mother, and completed a four year apprenticeship with Marshall & Snelgrove who made bespoke clothing, nowadays only made for top actors and actresses. Debenhams took over the company and customers went elsewhere. Ann then went to work at Nathans, a theatrical costumiers, making costumes to order. Mr Nathan was a tailor and hired costumes to David Garrick. His son carried on and a friend of Charles Dickens described such costumes in his books, George Cruickshank doing the illustrations. Nathans held a Royal warrant from Queen Victoria, designing costumes for a fancy dress ball for her Diamond Jubilee in 1897. They also made costumes for Lily Langtree and the play School for Scandal. Queen Elizabeth and her sister Princess Margaret even wore their fancy dress outfits on the QE2.

Their work continued in cinemas and Ann read out letters of thanks from various film stars, including Ellen Terry who wore a famous beetle wing dress. In the 1950s Nathan’s secured TV work including Robin Hood and Sharpe, when they made various military uniforms. They were made to a very high standard and were put through several processes to make them look war weary, using such things as wire wool and sandpaper. In the 1960s they made clothes for The Prince and the Showgirl, making not just one, but several of the same design. Marilyn Monroe’s famous dress recently sold for $4.8million. Their work continued in the 1970s when they merged with Bermans, making costumes for Moby Dick and the first trilogy of Star Wars, among many others. The label on an old brown cloak which had been hired many times for fancy dress parties was found to be originally made for Obi-Wan Kenobi and was sold for £54,000.

By 2007 they had been taken over by Angels and now have 9 ½ miles of costumes on their premises. They made costumes for Evita, copying the ones worn by Eva Peron and also made the Batman & Robin costumes for Only Fools and Horses. They later moved to Holborn and made armoury, using painted lightweight material, some of which was worn by Oliver Reed in Gladiators. They made several copies of suits for the Bond movies which had been made by Saville Row tailors. The workrooms where Ann worked were on the top floor, where wigs, jewellery and bespoke tailoring were made.

The costumes were always historically accurate, using traditional fabrics, often pure silk furnishing fabrics, even corsetry had to be authentic. Tea and coffee were used to make new lace look old for Edwardian times. Gold and silver jewellery was hand made for Lord of the Rings. Ann listed several films that the company provided clothes for, including Titanic and Oliver, where she made Nancy’s red dress from scratch which was then distressed by tearing, washing in hot water and sprayed with black paint.

This enjoyable talk was illustrated by several photographs showing her work. The job involves a lot of hand sewing and nowadays a degree in textile and design is needed in the theatrical costume business. Ann met the stars when she was young; she still loves the theatre but the work was long hours for little money.

Our next meeting is at 8.00pm at the Adult Community College, Richmond Road, Grays on Friday 24th February when our speaker will be our Chairman Susan Yates, entitled “Jack the Ripper”. Visitors are very welcome.