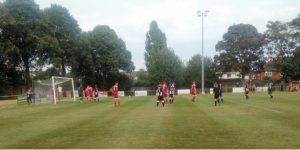 TILBURY’S play off hopes have been fading in recent weeks and after Friday night’s crushing defeat at the Len Salmon Stadium it means that the play offs are no longer a realistic target for the Dockers.

The Dockers won a corner in the opening seconds of the game which forced Rhys Madden into early action. But after that it was pretty much one way traffic. As early at the 4th minute Bowers showed their passing process when a delightful through ball from Alfie Hilton made its way to Billy Jones, but Louis Hawes was quickly off his line to smoother the ball. Hawes, making only his third appearance this term in the Dockers first team was kept busy and pulled off two fantastic saves; one a point blank reaction save from a Martyn Stokes header and then tipped away a Ben Sartain volley. Bowers had a penalty claim turned down, with the referee instead booking Billy Jones for stimulation. The Dockers were riding their luck as the opening quarter of an hour saw them under constant pressure.

It came as no surprise when Bowers took the lead in the 16th minute. Brad Warner, whose corners were a constant danger throughout, whipped one in from the right and Luke Wilson nodded it goalward but Daniel Smith was able to head it off the line. However the ball landed kindly to David Knight who slotted the ball past the Tilbury defence to give his side a deserved lead.

Tilbury simply found Bowers impregnable but Neil Richmond was able to find some space but soon found himself swamped by Bowers players. He tried in vain to lay it off to Lewis Jaggs as Stokes intercepted the pass and smashed the ball away. Kurt Smith was able to fire off a shot after the ball had pinged around the Bowers penalty box; but Madden didn’t have a shot to save until the 30th minute when a well struck shot from Joe Nightingill needed the Bowers keeper to dive low to his right to cut out.

Warner went close with a free kick towards the end of the half while Kurt Smith and Reece Hewitt both delivered shots in the closing stages of the first half that Madden needed to save.

Bowers had dominated the first half but went in at the break with a slender lead. It at least meant in theory Tilbury were still in the game but that notion was dispersed within three minutes of the re-start. Warner’s run into the box was halted by Danny Norton who knocked the ball away for a corner. The resulting corner kick was delivered right inside the six yard box and was bundled home by Martyn Stokes.

Bowers always looked capable of scoring more and in the 57th minute Brad Warner let fly from outside the area that clipped the far post. A minute late it was 3-0 to the hosts after Warner turned provider and laid off a defence-splitting pass to Knight who slammed the ball past Hawes.

It’s not as if Tilbury were not trying to launch attacks, in fact their midfield of Singh, Jaggs and Norton were trying to find Richmond and Hewitt, while Smith buzzed around but the Bowers midfield and defence didn’t allow the Dockers a sniff of goal. However a gilded opportunity came Tilbury’s way in the 73rd minute when a Hewitt shot hit the post and fell kindly to Lewis Francis but he thumped the ball over the bar from close range.

Bowers went 4-0 up three minutes later when Warner, who had caused such havoc with his corners and passing curled in a superb free-kick that flew into the roof of the. It was a fantastic goal and capped off a fine performance from the Bowers player, who had been a major protagonist against the Dockers defence. He went close with another free-kick in the final five minutes while the final shot of the game belonged to Richmond who was able to lob Madden but the ball landed just a whisker away from the top corner.

Tilbury were simply blown away by a well organised and clinical Bowers side. They now have to content themselves with finishing as high up the table as they can, with their last ever visit to Mill Field coming next Saturday, when they visit local rivals Aveley.