Arena Essex: Rock and roll at the Easter races

A massive rollover for Basildon’s Carl Victory was probably the incident which stood out on a lively Easter Sunday at Arena Essex Raceway. 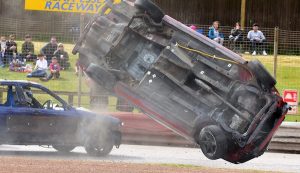 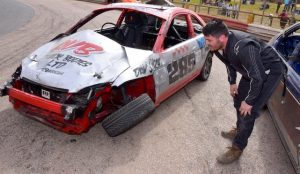 Victory’s wild ride came in heat two as he was pitched into a double roll which saw the car pirouette on its nose before landing back on its wheels, thereby allowing the race to continue around the obstacle.

Jack Coveney and Tom Greenstreet were the heat winners, surviving numerous crashes and hold ups along the way.

The packed final was the liveliest race of the day. Jodie Cheeseman nearly rolled as she was turfed aside in her Ford Ka, Reiss Carroll crashed into an infield marker tyre and Bill Crittenden went on a, not entirely legal, wrecking spree on the pit bend which involved Ronnie Hunt and John Harris. Matt Lewis raced to the win.

The Destruction Derby saw Ashley Colaluca spun hard into the pit gate, where he was joined a lap or two later by Vic Bilky, who was put in at speed by Tommy Harding. Bilky then got further damage from Ray Edmunds. Ronnie Hunt strangely attacked a few, already dead cars, including that of Colaluca, before sensibly switching his attentions to the few remaining runners. A unique double hit on the cars of Joe Powers and Dan Nichols did much to aid his cause, although the final blow came on the back straight as Powers and Hunt met in a big head on, from which Hunt was the only one able to back away.

Three frantic Stock Car races saw a heat and final double for Don West, whilst Phil Wise won the other heat. Points leader Alfie Jones took second place in every race, perhaps eyeing up an opportunity for a last bend strike on each occasion, but somehow always just coming up short. Steven Donovan had a hard crash early in the day, but was back out, his car seemingly not in as bad a state as the barrier into which he had crashed!

Finally the Heritage F2 Stock Cars provided a touch of nostalgia to the day. The popular Spiderman themed car of Andy Webb won the final, after heat wins for Granville Wright and Phil Smith.