THAMES Oilport has opened for fuel supply by loading its first customer road tankers. This is another significant milestone in the regeneration of the site, to turn the former refinery into a modern import terminal capable of meeting growing fuel demand in the South East. 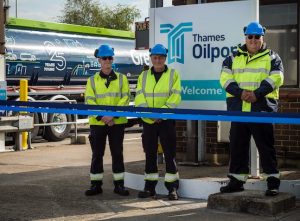 Twelve months ago Thames Oilport opened for diesel storage when it completed rebuild of tanks and received its first imports of diesel by ship. Over the last year additional investments have been made to rebuild road loading facilities to allow for diesel supply into trucks and onwards to customers. The next phase of regeneration will enable petrol storage and supply.

Chris Brookhouse, Chief Executive of Thames Oilport said
“Over the past year we’ve been working hard to modernise the fuel infrastructure at Thames Oilport. Going forward the pace of activity will increase further, with ships arriving down the Thames to bring fuel to site and a variety of customer trucks collecting fuel. There will also be more people on site as fuel tanker drivers move to their new depot here. This is great news for the local economy and for the UK’s fuel supply network.”

Gary Shaves from Greenergy Flexigrid was the first driver to load fuel at Thames Oilport. He said:
“I‘ve worked in the area for many years and was based here in the days of the old Coryton refinery. I’m one of the first drivers to be loading fuel here today and to be moving to the new driver depot. I am really pleased to see the plans for Thames Oilport becoming a reality and I look forward to seeing the other facilities on site coming to life in the coming months.”

3 Responses to "Thames Oilport open for business at Coryton site"