“Too little, too late” Residents and politicians pour scorn on Jackie Doyle-Price’s urgent talks with PM Theresa May over Lower Thames Crossing 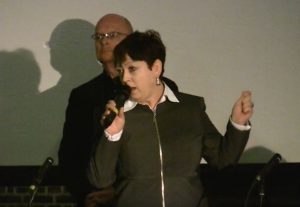 ON May Day, Jackie Doyle-Price issued a press release announcing that she had urgent talks with the prime minister, Theresa May, over the Lower Thames Crossing proposals.

The press release indicated that Ms Doyle-Price was against Option C3, which will run through Tilbury, Chadwell, Orsett, and across to Ockendon. It may also impact on areas such as Blackshots and Stifford Clays.

The press release did not detail Mrs May’s response but the response of some residents appeared to be fairly negative.

Comments on social media include: “Too little, too late”; “No backtracking now”; “Running scared”; “This just looks like a photo shoot to try to convince people she is fighting for them”.

“At least Stephen Metcalfe has spoken at the past years parliamentary debates of Lower Thames Crossing not like the silent Jackie Doyle-Price.”

UKIP’s candidate for the seat of Thurrock in the General Election on June 8th has also poured scorn on the MP’s statement.

“She told thousands of residents at the Tilbury Cruise Terminal meeting to ‘get real’ and accept a new Crossing. Now, all of a sudden, she’s telling us she will fight it. There must be an election on! In 2015, before the last election, she put campaign materials out saying she had “stopped” a new Crossing. We’ve seen it all before. She says one thing and does another.

“The people of Thurrock will see through JDP’s stunt. They know her record, she betrayed us on the Crossing and didn’t lift a finger to fight it. Thurrock needs a new MP who will fight the Crossing in Thurrock. I intend to do just that.”

“Too little, too late” Residents and politicians pour scorn on Jackie Doyle-Price’s urgent talks with PM Theresa May over Lower Thames Crossing added by Staff Reporter on May 2, 2017
View all posts by Staff Reporter →

2 Responses to "“Too little, too late” Residents and politicians pour scorn on Jackie Doyle-Price’s urgent talks with PM Theresa May over Lower Thames Crossing"