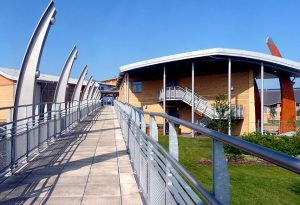 IN a recent Ofsted inspection of the Gateway Academy, Tilbury, inspectors praised the leaders for having ‘a palpable desire to improve the school and judged that the Academy’s leadership as ‘good’. They said that, as a result of this, pupils’ progress is accelerating, but in response to disappointing results in the last few years they judged that ‘outcomes’ for pupils require further improvement. Although it is clear that this trend is now being reversed and outcomes for students are improving.

Pupils’ personal development, behaviour and welfare were also judged to be good with inspectors saying that ‘the longer pupils remain at the Gateway Academy, the more mature their attitudes to learning typically become’. It is clear that pupils are proud of their school and that ‘lessons are often characterised by positive relationships between adults and pupils, with very many pupils wanting to learn’.

The report says that ‘many pupils typically arrive at the Gateway Academy with previous attainment that is below that of their peers nationally and, in some cases, significantly so’. Inspectors judged that some teaching and outcomes for pupils require improvement because they are not making enough progress in the early years of school. However, they acknowledged that Year 11 pupils in particular ‘including those who are disadvantaged are attaining high standards and making better progress from their individual starting points than has been the case in the past’. The report goes on to say that inspection evidence demonstrates that pupils currently at the Academy, especially in English and Maths are making better progress which is due to the improving quality of teaching. Inspectors praised the Academy’s ‘deep learning days’ which they said have ‘fired enthusiasm for subjects such as science’. They also praised ‘the impressive displays of pupils’ artwork that reflect the breadth of cultures that pupils study’.

Kevin Sadler, the CEO of the Gateway Learning Community Trust said that he was proud of the hard work and dedication of the staff and students at Gateway. He acknowledged that exam results had dipped recently due to a number of factors which include difficulties in recruiting experienced teachers, but stressed that there had been a significant improvement in GCSE results last year. He attributed this to the outstanding leadership of the
Head of School, Grainne McLaughlin.

He went on to say that inspectors were very impressed with the direction of the school under the leadership of Ms McLaughlin. The report states that the Academy is ‘moving forward rapidly due to the hard work of all the staff but particularly the Head of School’ who has been recognised for her skill and determination to ensure that all pupils make outstanding progress. Inspectors praised Ms McLaughlin’s ‘resolve’; her ‘considerable energy’ and that she ‘refuses to allow poor practice to go unchallenged’ as key factors that will help the Academy to move rapidly back to outstanding. Ms Mc Laughlin, Head of School said it was an absolute pleasure to work with the staff, parents’ community and in particular the students every day. ‘We are committed to ensuring that the Academy continues ‘to improve upon its best’ and will always put students at the centre of what we do. We have made some outstanding teaching appointments for the coming academic year and will continue to drive up standards to ensure we move back to outstanding’.

A full copy of the report is available on the Academy’s website at www.glc-gatewayacademy.org.uk/13/ofsted –