Open conversations ease the burden of bereavement for Thurrock patients

NURSES at Basildon University Hospital who care for patients at the end of life want to encourage people to talk more openly and make plans about dying, death and bereavement 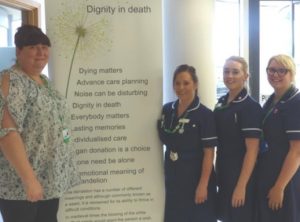 The Macmillan team is running an even tin the main reception area on Thursday May 11thfrom 10am to 4pm, as part of a national awareness week called Dying Matters.

Representatives from the hospital chaplaincy and counselling teams, solicitors, florists, nurse specialists and funeral directors will be on hand to offer advice and information on a range of topics, such as making arrangements for their wishes about where they want to die, funeral plans, will writing and organ donation.

Karen Andrews, head of nursing for Macmillan and end of life services at the hospital, said: “Facing the end of life is never easy for individuals, or their family and friends, and that can mean that people shy away from having important conversations and making plans.

“But in fact, talking about dying and having a clear understanding of the wishes of your loved ones can take a lot of anxiety away, and ease the burden for those who are grieving.”
See www.dyingmatters.org for more information.

An online campaign, called Die Well Essex, is being supported by health, social care, charities and voluntary groups across the county in the lead up to a national awareness week called Dying Matters during 8-14 May.

Using Instagram, people are being encouraged to share their favourite images of people, places or things that celebrate life as well as acknowledging the reality of death.

Just add a sentence on what the picture represents along with #DieWellEssex or tagging @DieWellEssex.

Join in with the conversation in the lead up to, and during Dying Matters Week 8-14 May, on Twitter @DieWellEssex or searching Die Well Essex on Facebook.