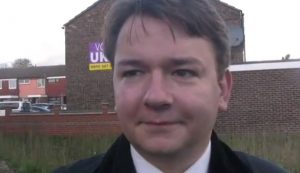 TIM Aker, UKIP’s candidate for the general election, is suprised to learn that John Kent has made affordable housing one of the main pledges of his campaign.

Cllr Tim Aker MEP said: “John Kent’s record on affordable housing during his reign as leader of the council is one of abject failure.

“When voters kicked Labour out in 2016, Thurrock had fewer council homes than when he took office in 2010. The total of newly built dwellings fell to historical lows under his watch.

“Much of the blame for the epic housing crisis we face in Thurrock today lays at the door of John Kent and his hapless Labour administration at the council. At the same time Thurrock’s population exploded as a legacy of the Labour Party’s irresponsible migration policy, continued by the Tories.

“Residents of Tilbury are all too aware of John Kent’s housing failures. Under his watch the St Chads development overspent by £3 million pounds. As a result the three bedroom units are being rented out at £1200 a month.”

Despite being fully aware of the crisis at St Chads, John Kent released the following statement in March 2016, ‘Gloriana, a company wholly owned by the council, is showing how it is possible to build in Thurrock and to build for local people in affordable ways whether that’s to sell outright, to share equity, or to rent.

‘We are determined we will create top-quality homes local people can afford to live in, the first Gloriana homes are here in Tilbury and soon we’ll be seeing more too.’

Tim Aker added: “John Kent believes that three bedroom homes rented out for £1200/month are affordable for local people. No wonder the Labour Party is so out of touch with the real lives of Thurrock residents. It’s time Thurrock had a new MP.