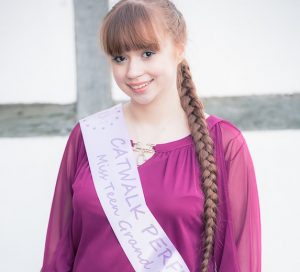 COURTNEY-Lee Collins, a 17 year old A level student at the Ockendon Academy is celebrating the results of her charity catwalk pageant she organised on Sunday.

Courtney-Lee is known for her avid charity fund raising and this time was no different. As part of the event, she offered prizes to encourage people to donate to worthy local causes.

Staff from Thurrock Foodbank collected 734 items from the event, having already received over a quarter of a tonne of food in February from another of Courtney-Lee’s events.

The event also raised £500 for Follow Your Dreams, a charity helping children and young people with special needs and learning difficulties. Courtney-Lee also donated £500 to the Brain Tumour charity and a further £53 to the Nicky Mason Memorial fund.

Courtney-Lee is planning a similar event for October, shortly before she takes to the catwalk herself to compete for the title of Teen Catwalk Perfect UK in November.