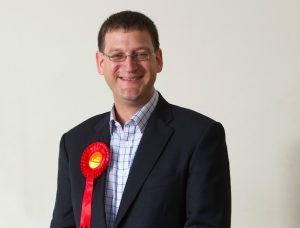 THE Labour Party have announced its candidate for South Basildon & East Thurrock in the General Election on 8th June.

Byron is 42, lives in Langdon Hills with his wife and two young daughters, and works for an IT firm in the private sector. He has been active on many local issues in recent years including the campaign to prevent the closure of Coryton Oil Refinery and proposals to introduce a living wage for Council workers. A former leader of the Labour Group on Basildon Council, if elected to Parliament he has pledged to protect local NHS services and oppose plans for a new Lower Thames Crossing.

South Basildon & East Thurrock Labour endorsed its candidates last night, saying it would be “campaigning to win” in both seats and “taking its message to voters on the doorstep”.

Byron Taylor, the candidate selected for South Basildon & East Thurrock, said: “This Conservative Government has slashed public services whilst doubling the national debt. Wages have stalled and we have seen the biggest rise in child poverty in a generation. Enough is enough. I am standing for Parliament because I believe South Essex deserves better’

“In the coming weeks we will be taking an upbeat campaign to the doorstep to remind voters of broken Tory promises and Labour’s pledge to build a better, fairer Britain.”