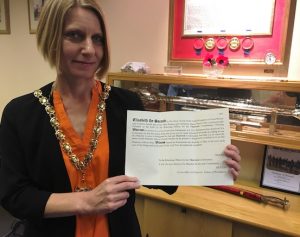 THERE was a special delivery to Thurrock Council last Thursday (4 May), marking the start of this year’s General Election process.

Following the dissolution of Parliament, the Clerk of the Crown in Chancery at the Palace of Westminster sends writs to all constituencies notifying them of the election.

As a servant of the crown, Mayor of Thurrock, Cllr Cathy Kent, formally received the writ.

Whilst she is the Mayor of Thurrock, Cllr Cathy Kent holds the title of Returning Officer in a Parliamentary Election for the Thurrock constituency

Polling Day is 8 June and only those registered to vote and eligible will be able to vote in the General Election. To make an application to register, go to gov.uk/register-to-vote by midnight on Monday 22 May. If you are already registered you do not need to make a further application.

If you require a postal vote, applications must be received by the elections office by 5pm on Tuesday 23 May.