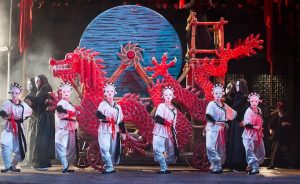 THIS well-loved production of Puccini’s Turandot returns to the Royal Opera House stage and will be broadcast live from Covent Garden to High House Production Park on July 7th at 7.30pm, as part of the 2017 BP Big Screens.

Princess Turandot has sworn that no man shall marry her unless he can correctly answer three riddles. Prince Calaf, captivated by Turandot’s beauty, takes up the challenge, solves the riddles – but he wants also to win Turandot’s heart. He proposes a new test: if Turandot can discover his name before dawn, he will die; if not, she is his.

Puccini creates a rich soundworld for this dark fairytale. The opera contains one of the most famous of all arias – ‘Nessun dorma’, sung as Calaf anticipates winning the Princess’s hand and immortalized in popular culture most of all by Luciano Pavarotti.

Audiences will be transported to a beautiful but savage world through the opera’s spectacular staging, featuring colourful sets and costumes inspired by ancient Chinese culture, reflecting the traditional Chinese melodies woven into the score.

Turandot is a wonderful introduction to opera, and the Royal Opera House is delighted to be able to broadcast its content live and free of charge to Purfleet.