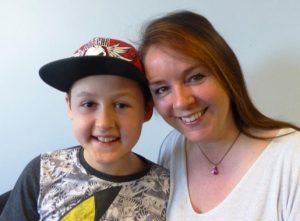 YOUNG people diagnosed with type 1 diabetes in the past six months got together along with their families to share stories, experiences and give support to each other.

A coffee morning is organised every six months for young people who are newly diagnosed with type 1 diabetes and their families are invited along to Basildon University Hospital.

As well as giving them a chance to learn skills to manage their condition, the children can make friends with those also experiencing the same things. It also gives children and their families the opportunity to meet members of the children’s diabetes team and ask any questions informally outside a clinical setting.

Diabetes is a long-term health condition affecting the amount of glucose (sugar) in the blood which can cause serious health complications.

When we digest carbohydrates, our body breaks it down into glucose. Insulin released by the pancreas moves the glucose into our cells to give us fuel for energy.
more ….

Type 1 diabetes is an autoimmune condition where the body attacks and destroys insulin- producing cells, which causes the glucose levels to rise in the blood. No one knows why this happens but around 10 per cent of people with diabetes, have type 1 and it usually presents itself in childhood.
Common signs of diabetes include:

Liz Daniel, paediatric diabetes dietitian, organises the coffee morning on behalf of the children’s diabetes team. She said: “Diabetes is something you never get a holiday from. It’s not easy and it’s a steep learning curve when it comes to learning skills of carb counting and matching with insulin injections.

“We try to teach the children the skills they need to manage the condition. If a teenager with type 1 diabetes is out with friends in a fast food restaurant, there’s no reason why they can’t have a milkshake and enjoy the same experience as their peers. They just have to take the insulin to match the carbs and if it’s managed properly, diabetes doesn’t have to change their lifestyle.

“The regular coffee morning came about because a mum asked me to put her in touch with another mum of a newly diagnosed patient. It’s helpful for them to talk to health professionals, but sometimes parents just need other parents to talk to about how they’re feeling. We’ve been organising these sessions for a while now with positive feedback, and the children and their parents have kept in touch and built friendships.”

Sheridan Boyle, nine, from Billericay, was diagnosed in February 2017, just a few days before her ninth birthday. Since then she has given an assembly to 239 fellow pupils at South Green School to explain about the condition.
She said: “I was scared beforehand; I wanted to hide under the stage, especially because my powerpoint presentation didn’t work and I had to remember as much of it as I could.

“I told them how I prick my finger and test my blood. I think I missed out some bits, and then they asked me questions. The main question was what do I have for treats if I can’t have sweets? I told them I just go out for dinner instead.”
Sheridan (pictured left) knew about diabetes because it is already in her family, so when she complained of not feeling well and drinking a lot of fluids, her mum took her to the

Sheridan said: “I feel a lot better now I’m on insulin. I have my down days and my up days, but it hasn’t stopped me doing any of my after school clubs. I still go swimming, musical theatre and church club.

“When I’m older I want to be a researcher and find a cure for diabetes.”

Jakub Lagosz, from Billericay, was diagnosed at the age of 15 in summer 2015. Now 17, he attended the coffee morning to share his story with his peers.
He was suffering with loss of appetite, weight loss, insomnia, tiredness, thirst and needing to go to the toilet when his mum made him go to the GP. A simple blood test led to a late night emergency dash to Basildon University Hospital.
Jakub said: “Even though we were told there’s something serious, get to the hospital and take a change of clothes, nothing much went through my head.

“Once I got used to it, I thought, well I can’t get rid of it, I’ve got to get on with it. The first six months I needed a lot of help and support from my mum and dad.
“But after a while you get used to it. You can look at a plate of food and know roughly the carb count and work out your insulin.”

Jakub is studying biology, chemistry, physics and religious studies at A-Level at Southend High School for Boys. He wants to follow in his mum’s footsteps as a
dentist. He offered to come along to the coffee morning because he wanted to help others who have just been diagnosed.

He added: “My main advice would be eat whatever you want and use your insulin according to that. Also it’s ok to have low and high readings – until you have figured yourself out you are not going to have ideal blood glucose levels. The more tests the better. Figure out the foods that work for you. Different foods have different effects on the blood levels of different people, due to the rate of digestion, absorption, speed at which it gets through the body, rate at which the glucose is used up etc.

“Get a good night’s sleep. Generally, if you sleep less, you’ll need more insulin and your sugar will be all over the place.
“The people around you have more of an effect than you might think. I used to drink coffee with sugar in it. When I was diagnosed, I stopped having sugar. My father, in a show of solidarity, did the same. This made it much easier to enjoy unsweetened coffee. Similarly convince those around you to stop snacking – if no one else snacks, you’re less likely to do it.
“You can do anything with diabetes. It’s not a case of ‘I can’t do it’. It’s a case of; ‘how can I do it?’ You need to plan more, but there’s nothing stopping you from doing the things you love.”

Sat in a doctor’s surgery a year ago, Karin Ridgers was told; “Get him to A&E immediately. You’ve just saved your son’s life”.
She had taken 11-year-old Callum to the GP because she thought he had a water infection; he was very thirsty, using the bathroom a lot and looked a bit pale.

Callum had type 1 diabetes and since then the family, who live in Billericay, have been on a steep learning curve.
Karin 46, explained: “When the GP said told us, I sat frozen. My first thought was, but we’re vegan. I soon learnt that type 1 diabetes has nothing to do with diet.

“Once the shock wore off, we absorbed it into our life. We refuse to let it stop us from doing anything. We carb count together. We never hide the fact he needs insulin. We talk to other people about it and he wants other kids to not be scared.

“We have down days. And I’ve cried my eyes out about it. It’s a huge learning curve, but the more aware you are about it, the more equipped you are to deal with it. It’s part of his life now and I’m so proud of him and how he’s taken it in his stride.
“The service and support we’ve had from the team here at Basildon Hospital has absolutely blown my mind. They are fantastic.”

For more information about type 1 diabetes and childhood, visit:
https://www.diabetes.org.uk/Guide-to-diabetes/Your-child-