Background: The murder of Danielle Jones 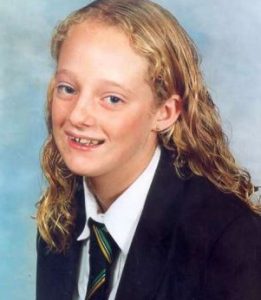 THE murder of Danielle Jones was a murder case where no body was found and the conviction relied upon forensic authorship analysis of text messages sent on the victim’s mobile phone.

Danielle’s body has never been found.

Jones’s uncle, Stuart Campbell, a builder, was convicted of abduction and murder on 19 December 2002. Campbell was sentenced to life imprisonment for murder as well as 10 years for abduction.

The use of forensic authorship analysis of text messages in the case provoked research into its use in other cases.[3]

Danielle was last seen near her home in East Tilbury, on the morning of 18 June 2001, while walking to a bus stop.

Monday June 18 2001: At 8am Danielle Jones leaves her home in East Tilbury, Essex, to catch the bus to school. The 15-year-old did not get on the bus and did not arrive at St Clere’s School, Stanford le Hope. A girl matching her description was seen getting into a blue van in Coronation Avenue, on the route to her school. There are several sightings of her during the morning, but since then she has not been seen.

Saturday June 23: Detectives arrest a 43-year-old from Thurrock, Essex, and issue a public appeal for information on Danielle. The man is released on police bail after questioning.

Wednesday June 27: Police release a home video of Danielle to jog the memory of potential witnesses.

Thursday June 28: It emerges that a text message was received from the schoolgirl’s mobile phone several hours after she went missing.

Saturday June 30: More than 400 members of the public join 60 police officers in a fingertip search of fields and marshland south of the teenager’s home village of East Tilbury, Essex, but find nothing significant.

Sunday July 1: Police reveal that a blue, Transit-type van at the centre of the hunt for the missing teenager was seen in the area on at least two previous occasions, and on both occasions teenagers, mainly girls, were seen talking to the male driver.

Monday July 9: Police say they are convinced Danielle was abducted. Divers search a lake near her home.

Thursday July 12: Three schoolboys report having seen Danielle double back on herself shortly after leaving her home on June 18.

Thursday, August 2: Linda Jones said she does not believe her daughter is still alive.

Friday August 17: Danielle’s uncle Stuart Campbell is rearrested in connection with her disappearance.

Suspicion fell on Campbell almost immediately and he was first arrested on 23 June 2001, five days after Danielle went missing. Detectives had delayed his arrest while weighing the possibility of endangering Jones’s life, on the presumption she was still alive and being held against her will, against the possibility of Campbell leading the police to her.

During police interviews Campbell was described as “uncooperative”. In one 20-minute interview with the police, Campbell refused to comment on 50 questions.

The investigation included several appeals to the public for information, including a reconstruction on the BBC television programme Crimewatch. During the investigation, over 900 police officers and support staff searched over 1500 locations for Jones’s body.

The police who investigated Jones’s disappearance were convinced within two months of her disappearance that she had been murdered, as on 17 August 2001 they had re-arrested Campbell on suspicion of murder, after finding “significant evidence” – an unusual step to take in the case of someone whose body has not been found.

A police superintendent said to the BBC that Campbell “developed a relationship with Danielle that was certainly inappropriate and probably unlawful.” Jones apparently tried to disengage, but Campbell resisted.

By 14 November 2001, the Crown Prosecution Service decided that the police had enough evidence to prosecute Campbell for murder even though it would be harder to secure a conviction without a body.

On 14 October 2002, Campbell went on trial for abduction and murder, having spent 11 months on remand. The Crown’s case rested upon several pieces of evidence. Jones had disappeared without contacting her parents and had been seen talking to a man in a blue Ford Transit van resembling Campbell’s on the morning of her disappearance. The testing of blood-stained stockings discovered in the loft of Campbell’s house found DNA matching both himself and his niece; lip gloss used by Jones was also found in Campbell’s home. A diary kept by Campbell revealed an obsession with teenage girls, with testimonies that Campbell had manipulated young girls into posing for topless photographs.

The text message that Campbell claimed Jones had sent to him. The message was sent in uppercase, however, Danielle habitually sent messages in lowercase.

Campbell was found guilty of both charges on 19 December 2002, and sentenced to life imprisonment for murder to run concurrently with a 10-year sentence for abduction. The High Court later ruled that Campbell should serve a minimum of 20 years before being considered for parole, meaning that he is set to remain imprisoned until at least November 2021 and the age of 63.

Aftermath of the trial

After his trial it was revealed that in 1989 Campbell received a 12-month suspended sentence for forcibly detaining a 14-year-old girl in his house and taking indecent photographs of her.

The use of text-message evidence in the trial led a group of researchers at the University of Leicester to begin studying text-messaging styles under the hypothesis that forensic research into the authorship analysis of such messages might help in future criminal cases.

In 2004, Campbell was granted leave to appeal against his conviction on the grounds that evidence of his obsession with Jones, and of his interest in schoolgirls, should have been excluded at his trial and on the further grounds that one of the jurors, the next-door neighbour of a police officer involved in the case, should have been discharged. The appeal was dismissed in 2005 by the Court of Appeal.

On 28 July 2005, an inquest by the coroner was held into Jones’s disappearance, returning a verdict of unlawful killing. Police interviews with Campbell in prison reported that Campbell had said nothing regarding the location of Jones’ body.

One Response to "Background: The murder of Danielle Jones"