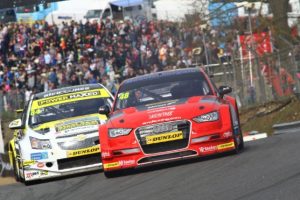 THE AmDTuning.com with Cobra Exhausts team will look to return to the points scoring positions when the Dunlop MSA British Touring Car Championship heads for Oulton Park this weekend for the fourth round of the year.

The West Thurrock-based team failed to score for the first time this season at Thruxton last time out despite displaying more encouraging pace on track with its Audi S3.

Tamworth-based driver Ollie Jackson went close to the points in all three races at a circuit that hasn’t traditionally been amongst his favourites on the calendar, with the 33-year-old now hoping to break back into the top 15.

Although the corresponding meeting last year ended in disappointment, Ollie showed strong pace on track with the Audi and returns to Cheshire with the upgraded car feeling confident about his chances.

“I’m really looking forward to the weekend,” he said. “Thruxton has always been a bit of a bogey circuit for me so I’m glad we can now put that one behind us, but I think we can be encouraged by the pace we showed going to a circuit that I think will be better suited to the Audi.

“There is the chance that the weekend might be wet, but we have a good understanding of what we need to do with the car. We also have a few ideas to investigate to try and improve our one lap pace and move us up the order in qualifying as that is what has held us back a little this year.

“We’ve had a strong race car at all three rounds this season, so if we can nail qualifying and start from higher up the grid, it will only increase our chances of adding to our points tally.”

Lichfield-based team-mate Ant Whorton-Eales produced his best qualifying performance to date so far at Thruxton as he broke into the top 20 for the first time, although an off-track excursion in race one followed by a mysterious electrical issue would then hamper him on race day.

The 22-year-old has a strong record at Oulton Park having taken to the podium in each of the previous three seasons whilst racing in the Renault Clio Cup and with his electrical issues now resolved, the BTCC rookie will seek to break back into the points himself to secure the results that his pace have deserved.

“After a tough end to the weekend at Thruxton, I’m looking forward to getting back behind the wheel and getting down to business at Oulton Park,” he said. “I’m hoping that with the engine gremlins having gone, we can put on a strong performance this weekend and challenge for points, whilst I’m also determined to fight for my first Jack Sears Trophy win of the season.

“Qualifying will be really important because of how tight it is at Oulton Park and how difficult it is to overtake. However, we showed at Thruxton that we can qualify inside the top 20, and I’m aiming to try and repeat that so we can fight for three good finishes on race day.”

Team boss Shaun Hollamby meanwhile expressed confidence that the failure to score at Thruxton would be a mere blip, and that both drivers would be in contention for points this weekend.

“As I said at the time, we were unfortunate not to score at Thruxton and we head to Oulton Park aiming to put that right,” he said. “Both Ollie and Ant have been driving well this season but we haven’t always been in the position to take advantage of the pace we clearly have in the car.

“We’ll be looking to improve our qualifying performance this weekend as Oulton Park is a circuit where he will be difficult to make the most of a good race car if you qualify down the order.

“Since upgrading the Audi over the winter, we’ve worked hard to improve our package and we go to Oulton Park with a car that we are confident will be strong; it’s just down to us to make the most of it to challenge for solid points across all three races.”