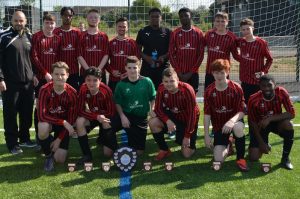 The players, who all study and train at the College’s Campus in Grays, confidently beat Sweyne Park 4-3 in the league final last week. Previously they beat Havering College 3-1 to lift the cup.

Both matches were played at Lakeside FC which could now be called a lucky ground for the successful squad.

The team didn’t get off to the best of starts in the league final going down two goals to Sweyne in the first 20 minutes but with strength and skill they managed to pull it back.

In an exciting match, South Essex went on to score four goals to take them to victory including two greats shots from striker, Hakeem Lewis-Harrison.

Elliot Stamps, Academy Course Leader and Manager, said: “We didn’t do it the easy way but I always believed we could win. It’s brilliant to get both titles.

“After a very complacent start to the game, the boys really dug deep and showed the type of form and temperament that has seen us loose only two games all season. Especially in the second half, we controlled the game and created a number of good chances.”

There are still places available to join the best Essex College team in September 2017, to apply for a Sport course at South Essex College visit www.southessex.ac.uk