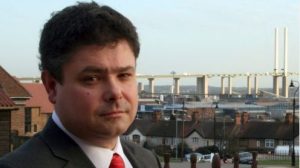 THE Thurrock Labour candidate for the General Election has asked Thurrock voters to ask the Conservative candidate, Jackie Doyle-Price and her campaigners three questions.

“I urge any Thurrock pensioners that are fortunate enough to get a chance to question Jackie Doyle-Price, or other people wearing blue rosettes, to make sure they take that opportunity.

“Ask why she wants to do away with the triple lock on your pension? This carries the real risk of pensioners sliding back into poverty.

“On top of that, ask why she wants to do away with the winter fuel payment? Ask if they’ve ever had to wrap themselves up under blankets because they have a choice between heating and eating.

“And ask them about the Conservative dementia tax. Under these plans, if you develop any care needs in older age, you may now be forced to sell your house to pay for it, even if the care is delivered in your own home.

“It was back in 2002 Theresa May coined the phrase the Nasty Party and now she’s proving it.

“We think there is a better, fairer, way to treat people that have worked and contributed their whole lives. Only Labour will guarantee the dignity in later life that people in Thurrock need.”