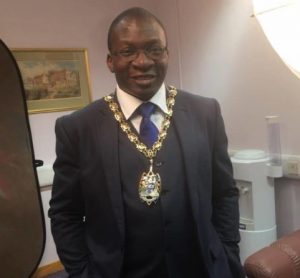 Cllr Tunde Ojetola is the new Mayor of Thurrock following a year of being Thurrock’s Deputy Mayor. He was elected unopposed at Wednesday (24 May) evening’s annual meeting of Thurrock Council.

“Thank you to all” was the focus of his acceptance speech recognising the trust the room had placed on him and added: “It is a job I hope to do with all my might.”

Cllr Ojetola continued his thanks to outgoing Mayor, Cllr Cathy Kent, for her hard work during the last year and went on to thank members of his family, friends and his spiritual leaders.

Talking about his future ambitions, the new Mayor said: “Over the next twelve months I hope to promote Thurrock and promote the good work of the unsung heroes who just go about their charitable work.”

Cllr Ojetola announced this year’s charities will be the Thurrock Community Chest and Contact the Elderly, which supports social events for older people.

Retiring Mayor, Cllr Cathy Kent, said: “I carried out more than 250 visits over the past year meeting hundreds and thousands of those ordinary people, each and every one of them helping our community, not making a fuss, just getting on with their lives and doing good.”

Leader of the Council and the Conservative Group, Cllr Rob Gledhill paid tribute to the Cllr Kent, and said: “I’m sure you’ll remember last year when I said ‘don’t try to step into the shoes of the previous Mayor – make your own impact’ – you did make your own impact in many, many ways.” He ended by extending a warm welcome to the incoming Mayor.

Leader of the UKIP Group, Cllr Graham Snell, said: “Cathy, one of the things which struck me over the time was your enthusiasm for the role. Everywhere I went where you were, it was all smiles and fun.”

He added: “Tunde you are absolutely the right man for the job and I’m sure you’ll be fantastic”

Newly-elected Leader of the Labour Group, Cllr Oliver Gerrish, said: “When Cathy was installed last year, she pledged to uphold the dignity of Thurrock Council and to enforce courtesy and good behaviour in the chamber. I think she has done that in spades.”

“I know Tunde brings a great amount of energy and enthusiasm to everything that he does and I’m sure that he will do us proud as the new mayor of Thurrock.”