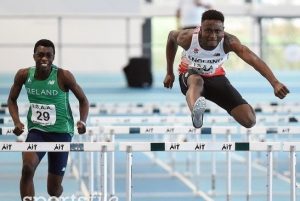 Unfortunately due to other commitments it was a much depleted team but there were some great individual performances from both the men’s and ladies’ teams. Everyone did their bit, doing so many events each to help gain valuable points for the team.

Highlight of the men’s effort was an excellent win in the 4 x 100 relay. The team consisting of Charlie Splarn, Jess Allen, Yinda Sidipo and Ben Gibbs returned a time of 43.08 – just 7 tenths of a second outside the 30 year old club record. That record will be the target of the club’s strong sprint squad over the remainder of the season.  That sprint squad scored good points in the 100m and 200m and in the horizontal jumps. The teams had a good day in the high jump finishing second. In that event Charlie Splarn surprised himself by clearing 1.63m.  The middle distance squad was very depleted and all the efforts of Jon Metcalf (V55) and Bernie Johnson (V65) could not make up for the lack of numbers. However Jon’s 800m time of 2.18 ranks him in the top five in his age group nationally.

Mention too for Alex Marshall, in his first seniors match, whose pb in his 800m debut caught the eye.  Sue Lawrence led a strong women’s throws squad who only dropped 3 points all afternoon. Sue won the shot, discus and hammer and only just missed out on the javelin. Jill Boosey, Toyin Olyferri and Megan Smith made up a strong ‘B’ back up with two wins and two second places.  As in the men’s section the sprinters earned good points. Toyin Olyfemi, Tolani Odumosu, Lola Omowanile covered the sprints and jumps efficiently. Rebecca Barnard is the female equivalent to Ben Gibbs and earned good points in a variety of events.  Final points were; Ryston Runners 212, Stevenage & North Herts 212, Medway and Maidstone 198, Thurrock 125. For the next match, a shorter journey (Croydon) and hopefully less other commitments will mean a much better result.

Fantastic results in the U15G competition with Thurrock Harrier athletes coming 1st and 3rd place. Hathaway Academy’s Ruby Bridger came first place with a pent score of 2943 which still rank her 2nd in the country and gaining a PB in High Jump of 1.58m and Sola Taiwo from William Edwards came third with a PB of 2802, also gaining PB of 2:31:7 in what was an exciting 800m race. The girls currently sit first and third in the East region.