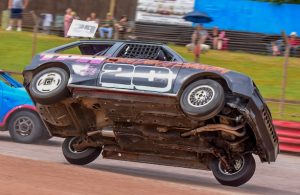 Donovan battled his way to the front in the final but looked like he was being reeled in by Georgie Boult Jnr. However, far from being easy pray for a traditional last corner lunge, Donovan managed to pull far enough clear and instead Boult found himself under attack from Phil Wise. With Boult on the outside, Wise next and Don West trying to pull up the inside it was three abreast as they approached the line – albeit the order remained unchanged.

The first heat had seen an even more dramatic finish as Billy King attacked leader, John Harris into the last corner, but broke a wheel in the process. As Harris recovered from the push, Phil Wise arrived on the scene and spun Harris as they approached the finish line – the spinning Harris crossed the line just a couple of inches ahead of Wise. Billy King didn’t make the same mistake in heat two, dominating the race once Harris had retired with a broken throttle cable.

There was action right from the green flag in heat one for the PRI Bangers when Aaron Chapman launched off the side of Kurt Butcher and rolled in the middle of the track. Purfleet’s Jack Coveney won and crashed Anthony Baldwinson into the armco in celebration.

Harry Barwell racked up a few driving offences in the second heat as he followed in Stanford Le-Hope pairing T-Jay Powers and Bradley Powers. T-Jay extracted some revenge before being crashed by Ben Roger. T-Jay then managed to summon up enough speed from his badly warped car to do another lap and crash into Rogers. Luke Hardy took the win.

Jack Coveney won the final from the rapidly closing Paul Whiteman and celebrated in much the same way he had celebrated his heat win, by firing in a rival – Trevor Arnold on this occasion.

The entertaining Destruction Derby saw Dominic Boden follow Kurt Butcher hard into the pit bend fence, whilst Paul Whiteman did similar to Harry Hunt on the other bend. Boden, Micky Galloway and Jack Coveney then orchestrated a big crash on the pit bend, Callum Sealy joining in the fun with a big hit to Galloway. Eventually it came down to a straight fight between Sealy and Coveney with the latter slowing on a couple of occasions to allow Sealy to strike. The final crash was a head on between them with Sealy given the verdict.

Drama was prevalent in the Lightning Rods with a contentious clash between the leaders Lee Page and Dan Guidotti in heat two which saw both cars clatter into the infield marker tyres. Danny Londors and Dave Imber shared the heat wins. Page was a non starter in the final and Guidotti soon worked himself to the front after passing Danny Londors. Londors then fended off Paul Strawson until the two clashed on the home straight. Somehow, Strawson rescued the airborne moment to come out in second place and Rob Merritt also managed to squeeze up the inside of Londors before the races end.

Danny Wade drove two perfectly judged races to win heat and final in the Stock Rods, the Corringham racer going the long way around the well driven pairing of Michael Seex and Robert Taylor. Seex held on for the win in the first heat of the day, narrowly fending off a concerted effort from Wade and then Matt Rowling, the latter unfortunate to puncture at a vital moment. A slippy track caused a bit of chaos in the final with Wayne Shackleford and Tyler Scott both clattering into the inner kerbs on turn two as they failed to rescue their sideways moments. In reality this was small fry compared to the two wheeled moment Ricky Lofthouse managed in the first heat – his Nova travelling much of the back straight in such a pose!

The next action at Arena Essex is this weekend with the return of the Impact Videos Shootout for National Bangers. Lightning Rods and Mini Stox provide the support with action due to commence at 1pm.