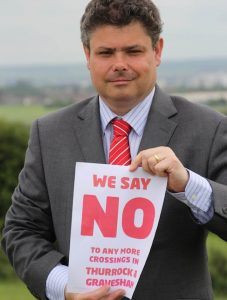 Andy McDonald, the Labour Party’s Shadow Secretary of State for Transport, has announced that if elected, a Labour Government would halt the Tory plans on the Lower Thames Crossing and re-open all alternative options.

Thurrock’s Labour Parliamentary candidate John Kent has consistently led opposition to the Lower Thames Crossing, and has now been successful in taking his case to the UK Labour Party.

Andy McDonald said “John Kent has presented a very powerful case on behalf of Thurrock residents about the route of the new Lower Thames Crossing through the Thurrock countryside.

“He forcefully makes the case that the legitimate concerns of local residents have not been fully considered as to the damage this crossing would cause in terms of air pollution, environmental impacts and loss of homes.

“An incoming Labour government will look again at all options – including the options to the east of Thurrock that were prematurely dropped.

“Before we agree to spending £6.5 billion we have to be sure that we will actually resolve the problem of congestion around the existing crossing and that is then done in a way that does as little damage as possible.”

Responding to the announcement, John Kent said “I am delighted that the Labour Party has listened to local concerns and vowed to review the Tories’ disastrous plans.

“The choice at this election is clear. Jackie Doyle-Price has disgracefully tried to tell us to give in and accept another motorway crashing through Ockendon, Chadwell St Mary, Little Thurrock and Tilbury. In contrast I have successfully fought Thurrock’s corner and if I am elected on June 8th I will continue to make sure Thurrock is never taken for granted again.

“The Labour Party’s announcement gives people a real chance to stop Jackie Doyle-Price’s new crossing destroying our greenbelt and poisoning our air. Only Labour will put Thurrock residents first and fight for our communities.”

One Response to "GE17: Labour Government would halt Lower Thames Crossing plans and re-open “all options”"