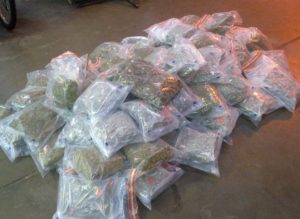 A former couple have been ordered to pay more than £650,000 for their part in a money laundering and drugs conspiracy.

Robert Preston, 57, and Michelle Clark, 53, were among a number of people arrested and charged following an operation by officers from the Kent and Essex Serious Crime Directorate.

Officers stopped two vans on the A13 in West Thurrock in February 2014 and found 196 kilos of skunk cannabis worth nearly £2million.

The drugs – which had been imported into Harwich from the Netherlands – had been collected from a depot in West Thurrock and hidden among fish food.

Preston and Lee Samways, 27, then both of Great Stony Park in Ongar, and Stephen Demetriou, 25, then of Wallace Way, Romford, were charged with conspiracy to import Class B drugs. Preston and Demetriou were also charged with money laundering.

They admitted the charges and were sentenced at Basildon Crown Court in May 2015.

Preston and Demetriou were given jail terms of four years and three months and Samways was jailed for 21 months.

Michelle Clark, 53, then of Great Stony Park in Ongar, was charged with money laundering. She pleaded guilty at Basildon Crown Court and was sentenced in August 2015 to ten months imprisonment, suspended for 12 months, 200 hours of unpaid work and ordered to pay £900 costs.

Essex Police subsequently applied for confiscation orders under the Proceeds of Crime Act.

Preston was ordered to pay £367,608.61 based on his available assets following a hearing at Basildon Crown Court on May 22. If he fails to pay, he faces three years in jail.

Detective Chief Inspector Josie Hayes said: “This was a sophisticated and lucrative drugs enterprise, from which they would have received a substantial profit.

“We will use always look to use legislation under the Proceeds of Crime Act to try and ensure criminals do not benefit from their offending.
“The forfeited money will be used to further enhance Essex Police’s capability to tackle crime and keep the communities of Essex safe.”