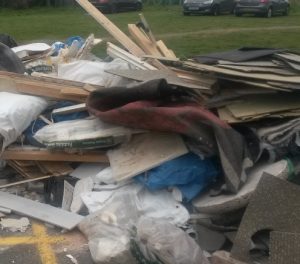 THURROCK Council has apologised for letters received by residents in Grays asking them to pay to clear fly-tipping in alleyways at the rear of their homes.

Leader of the Council, Cllr Rob Gledhill, said: “Where we make a mistake, it is important to identify it, apologise and take action. The letters were sent prematurely and we apologise for any inconvenience or distress these letters may have caused. I have asked that letters of apology be sent to all those who incorrectly received the original letter.

“Since the letters were issued we have received information from residents that is being investigated and when that is complete we will of course inform them of our findings.

“The council is responsible for clearing fly-tips on public land and highways – and we spend around £125,000 of taxpayers money each year doing so. However land owners are responsible for clearing their own land, and unadopted areas – such as some alleyways – are in general the responsibility of surrounding land owners. When piles of rubbish could become a threat to public health steps must be taken to protect the local residents and the public at large.

“We are reviewing the options available to the council to support landowners to address fly-tips in alleyways and I have asked officers to complete this review before the end of the month.”