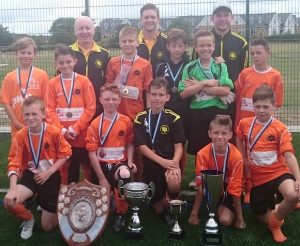 THE Thurrock Primary Schools District Team concluded their season on Saturday with a total haul of four cups. The 11 boys representing Thurrock Primary schools have only been together this season and have had an excellent run of results. The cup haul included The Essex District Plate, The Chelsea FC Cobham District Cup, The Essex District 7-a-side and The Crisp Shield (previously won by Bobby Moore when he was 11 years of age). They were also runners up in the London Lester Finch Trophy.

Kevin Watts, co-manager of the team said, ‘It’s been a fantastic season with the team really developing and playing as a unit to achieve some commendable achievements during their first year together. The schools should be very proud as the whole team have represented the borough of Thurrock with such commitment and pride. Everyone should be very proud.’