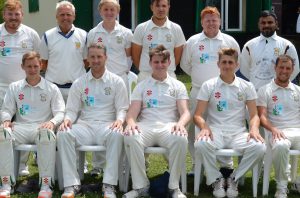 Tight bowling from Madder and Stone gave early reward with Madder picking up the wicket of Jordan Austin. With the visitors looking more settled it was time again for skipper Jeff West Jnr to enter the fold. In an incredible 8 over spell of spin, and a pinpoint fielding display, the skipper picked up 5 huge wicket and put the home side firmly in the driving seat. Debutant Tom Piggott also picked up 3 crucial wickets for only 16 runs off 7 overs and Linton Park were all out for just 127, a total Horndon were totally confident of chasing.

With a good crowd expecting fireworks Horndon started slowly. Tom Stone and Jack Walsh faced a tough opening spell from Sam Boyns who was rewarded with the wicket of Stone for 19, a rush of blood to the head of Walsh and he soon followed, bowled by Will Thirkell. A very good bouncer dismissed Stitson for 0 and Horndon looked in trouble on 45-3. Scott Plom had dug in at the crease but was finally removed by Thirkell with Horndon struggling on 54-4.

Captain Jeff West Jnr was joined by 17 year old Daniel Stone with 73 still required. The pair played with confidence and showed no nerves despite such a big game and a tense situation.

Quick running and smart cricket soon put the home team at ease. A magnificent 30 not out from Daniel Stone, who showed huge maturity let the captain go to work. Jeff West who had moved onto 40 not out and the team needed only 1 run to win he finished in style. To the delight of the crowd he plonked Josh Knowler over mid-wicket for a huge 6 and another brilliant win in this historic competition.

Horndon now progress to the last 16 and travel to Buckinghamshire to face Bedlow Village Cricket club on Sunday 9th July.