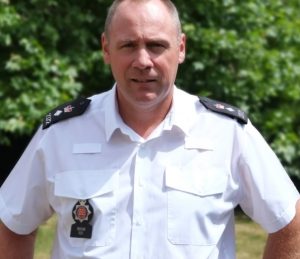 ACTING Chief Superintendent Trevor Roe has retired from Essex Police after 34 years with the force.

Starting as a Special Constable in 1983, Mr Roe became a regular officer in 1987.

He has spent much of his career in the west of county in a variety of roles, across all ranks in both the uniform, detective and a number of strategic roles across the force.

On promotion to sergeant, Mr Roe was one of the custody sergeants and the brand new Harlow custody suite and while a detective sergeant in Harlow, helped to set up and run the pilot system for running the is now informant handling units.

Between 2000 and 2002 he was the Deputy Chief Constable’s staff officer, before taking promotion to detective inspector at Basildon. In 2006, he was selected to take charge of the new Neighbourhood Policing Team model and the new Police Station at Pitsea.

Then in 2007, Mr Roe was selected to work on the initial setting up of collaboration between Essex Police and Kent Police, which set out the framework to allow both forces to work more efficiently and led to him ultimately being seconded to work in London with HMIC. Here he worked as part of a small team to prepare a report on how to take national collaboration forward, with proposals which were presented to the Home Secretary.

In 2011, Mr Roe, now a Superintendent, was appointed head of the Essex Police College, leading to a revamp of the site, improving facilities for recruits and helping their development.

He retires as the Temporary Chief Superintendent of the West Local Policing Area.

During his time at Essex Police, Mr Roe has played a key role in developing and implementing, delivering a new approach in dealing with night-time economy, the introduction of the new body-worn video cameras, force lead for restorative justice/community resolutions, as well as taking the lead for TRIM (Trauma Risk Incident Management) to ensure the welfare of officers who have worked on and experienced particularly traumatic incidents and investigations are supported.

T/Chief Supt Roe said: “The last 34 years has given me such satisfaction and variety, it’s been a blast.”

“I’ve been lucky enough to do so many things in my time at Essex Police but what particularly stands out is my time in Pitsea, establishing the new Neighbourhood Policing Team and the work with HMIC.
“Each role I’ve had has been better than the previous one, but the position of Superintendent has been a particular highlight.
“Being able to work with officers and support them has given me great satisfaction and I am very proud of the role I’ve been able to play in developing the fantastic teams I’ve worked with.

“I firmly believe we have among the best police officers in the country and the fact I’ve played a role in that is something I hold very dear.
Mr Roe added: “For me, policing is all about the victims.

“Helping victims of crime and trying to make a difference to someone who has had their world turned upside down is why we do this job.
“It’s often challenging, and sometimes we don’t get the results we want, but we never stop trying to get justice for the people we serve.”

Mr Roe now intends to take a bit of time out, spend some time with his wife and three children while having regular trips to the west coast of Ireland.

He will be greatly missed by his colleagues and Essex Police is grateful to his long and distinguished service.