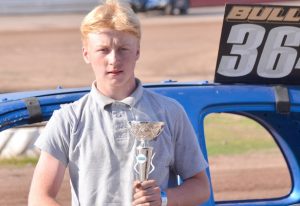 TEEN sensation, Bradley Lee ensured he finished at the top of the qualifiers in the National Micro Banger World Series, with another two wins at Arena Essex on Sunday. Bradley now heads into the World Series Final on 13th August as the hot favourite for the inaugural title.

There was a good entry of cars, with the first heat won by local man, David Daws, whilst David Smith, not for the first time, took a bunch of damage from Paul Korpiela and Mark Chapman took enough damage that we all suspected he would be out for the day – but the team set to work in the pits to resurrect the wreck in time for heat two!

As Chapman trundled around in his badly warped car, Jason Hutchins went up in flames following a hit from Ricky Korpiela bringing the race to a suspension. When it restarted Chapman brought out another suspension when he was hit by Matt Butcher, rolling him lazily onto his side. For the third time of asking the race resumed with Butcher’s next victim being Lewis Canham, who clipped Butcher and slammed the fence hard before being on the end of numerous other hits. Lee Hughes dodged the mayhem to take the win.

The final saw Danny Green take a huge amount of damage from Paul and Ricky Korpiela, Ricky Deans and Jack Ansell. Liam Deans followed Shane Sutton hard into the fence whilst Ansell did the same to Beau Lancaster at the other end of the track. George Drake showed good spirit, losing a wheel but attempting to carry on regardless.

Lee took the win and did so again in the allcomers race that preceded the Destruction Derby. With his own car wrecked, Danny Green took out the car of team mate – David Smith – unfortunately a head on collision with Liam Deans resulted in a hospital visit and a possible broken foot. The first lady of Banger racing – Jodie Cheeseman – took early damage from Ansell and then from Aiden Egan, before Egan and Nathan Roberts slugged out the final moments of the DD amongst themselves. Roberts eventually the victor.

A great day of Mini Stox racing was marred by a huge accident which befell Abbie McGuiness in the Final. Abbie launched off one of the inner kerbs and did a triple rollover, with her rear bumper digging into the tarmac and flipping her end over end. An understandably shaken Abbie was carted off in the ambulance but we are pleased to report she suffered no more than bruising to the tissue on her knee and is already planning on racing this coming weekend!

After a year of domination from David Shearing and Aaron Totham, visiting driver, Charlie Lobb won all three races in accomplished style.

A good entry of Lightning Rods saw three different winners with Chris Reeve and Dan Guidotti winning the heats. Jay Page-Fuller drove superbly in the final to take the win, putting behind him a troublesome season thus far. There was unfortunately a fair amount of damage during the afternoon with Sam Shirmer going into the fence like a ton of bricks in the first heat and a pile up in the same race which claimed Marcus Reeve, Anthony Lawrence and Nigel Carroll.

A small Stock Rod entry nevertheless provided an enthralling lead battle in the first heat which ended with Wayne Shackleford being spat out into the home straight wall after a clash with Liam Morris. Track Champion, David Crouch took the win in that first heat and repeated the feat in the final too. Carl Shackleford took the spoils in the second heat, preventing a Crouch clean sweep.

The next action at Arena Essex is on 16th July when the popular annual Caravan Race is the feature event. A full day of PRI Banger, Lightning Rod, Stock Rod and Stock Car racing is also on the bill, with the usual 1pm start time.