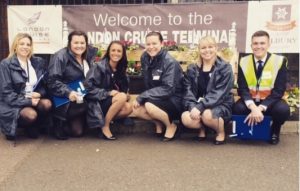 PURFLEET based Cruise & Maritime Voyages introduced another ship Columbus, into their expanding fleet earlier this month, at a prestigious naming ceremony in Tilbury.

The company has received 5,500 more calls compared to a year ago such has been public interest. As a result of increased business growth, CMV has announced this week they will be investing in three new apprentices plus two additional staff in their Customer Services division.

Miranda Coates, Manager of Human Resources at CMV said, “Our aim is to get as many young people between 16-20 years applying for the three apprentice positions. We are now seeking energetic and enthusiastic young people looking for their first job in the exciting travel and cruise holiday business. When the company started over nine years ago we had a small team of seven people we now employ more than 120 staff here in the Purfleet Head Office, which is great news for Thurrock. This is a golden opportunity for the right people as many of our young people have moved up within the organisation both in our Head Office and on board the Ships.”

The apprenitce roles will be based in the company’s head office in Purfleet, near Lakeside Shopping Centre and will be paid. Full on-the-job training will be provided from the talented CMV HR and Customer Service staff and in addition, the apprentices will gain an NVQ qualification in Customer Services or Business Administaration at the end of the 12 month period.

The company has an impressive record of expansion making it today the leading independent privately owned Cruise Line and only Cruise Line based in Essex. The recent naming ceremony in Tilbury of Columbus by Angela Rippon, known in the industry as the Godmother, has brought the total number of CMV ships in the fleet to five.