COALHOUSE Fort Park in East Tilbury Village has been recognised by the Green Flag Award Scheme as one of the very best in the UK. 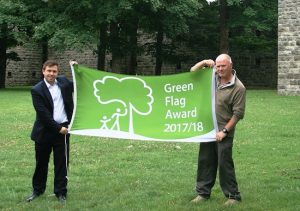 The park is among a record-breaking 1,797 UK parks and green spaces that have received a prestigious Green Flag Award – the mark of a quality park or green space.

This international award, now into its third decade, is a sign to the public that the space boasts the highest possible environmental standards, is beautifully maintained and has excellent visitor facilities.

Coalhouse Fort Park is 400 metres south of East Tilbury Village on Princess Margaret Road. With its riverside location, the park has a unique setting making it one of the most interesting open spaces to visit in Thurrock.

“We know how much quality green spaces matter to residents and visitors, and this award celebrates the dedication that goes into maintaining Coalhouse Fort Park to such a high standard.”

“Each flag is a celebration of the thousands of staff and volunteers who work tirelessly to maintain the high standards demanded by the Green Flag Award. The success of the scheme, especially in these challenging times, demonstrates just how much parks matter to people.”

To find out more information about Coalhouse Fort Park, please go to thurrock.gov.uk/coalhousefort