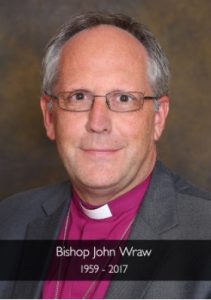 THE Bishop of Bradwell, Right Reverend John Wraw, died peacefully in his sleep at home in the early hours of 25 July 2017. He was diagnosed with multiple myeloma in 2014.

Bishop John said at the time of his installation as Bishop of Bradwell in 2012 that he believed the Church of England needed to “reach out and change society”. He unpacked this theme in his 2016 Lent lecture when he said: “Ministry is not about serving the Church. It is about serving God in the world”.

Stephen Cottrell, the Bishop of Chelmsford, has said: “Bishop John was a wonderful servant of the gospel and a fantastic colleague. As an archdeacon in Wiltshire he was known to be dependable and creative. As a bishop serving in this great diocese of Chelmsford these qualities blossomed and bore fruit as he helped take forward our diocesan vision for growth and renewal. He quickly won the confidence of the clergy and the love of the people he served.

“When he was diagnosed three years ago, despite the obvious shock, he was determined to carry on with his ministry. Many people would have simply retired. Bishop John just got stuck in, teaching the Christian faith, visiting the parishes he served, and refining his understanding of the gospel so that his life now matched his ministry in a way that was humbling and inspiring to experience.

“He not only spoke about the wonderful inclusive hospitality of God’s love, he lived it to the last. I could not have wished for a better colleague. We will miss him hugely.

“Please hold Gillian and their family in your prayers.”

Bishop John called for change in the Church especially in the encouragement of vocation among people God is calling to ministry. In a blog on vocations in October 2016 he wrote: “the Church and its processes… need radical change to value and create space for those whom God is calling”. Bishop John was very encouraging to young people and young adults. The Encounter scheme in Chelmsford Diocese, which has given young people an opportunity to explore their vocation, was his initiative. He served as the Chair of the Chelmsford Diocesan Board of Education, acted as a mentor to a group of young disciples, and hosted Take Over Challenge days with young people.

The arrangements for Bishop John’s funeral will be announced in due course.

John Wraw was born in Hampshire and grew up in Chester. He studied Law at Lincoln College Oxford, and trained for ordination at Fitzwilliam College and Ridley Hall Cambridge.

He was ordained in 1985 and served in Hereford and Sheffield dioceses before becoming Archdeacon of Wilts in 2004.

He leaves a widow, Gillian, and four grown-up children.

He was involved in community development and social justice in Sheffield and in Rotherham where he served on the strategic partnership board and chaired the local voluntary and community sector body. He was appointed area dean of Rotherham and an honorary canon of Sheffield Cathedral, and he chaired the faith and justice committee in the Diocese of Sheffield.

As Archdeacon of Wilts in Salisbury Diocese he was a board member of the Wiltshire local strategic partnership and chair of the successor body, the Wiltshire Assembly. He also chaired the diocese’s Learning for Discipleship and Ministry Council, which was responsible for training clergy and licensed lay ministers and for lay learning programmes in Salisbury.

In 2009 he took part in the first leg of the Clipper Round the World Yacht Race from Hull to Rio de Janeiro.

He was consecrated as a Bishop by the then Archbishop of Canterbury, Rowan Williams, at St Paul’s Cathedral and installed as Bishop of Bradwell by Stephen Cottrell, the Bishop of Chelmsford, at Chelmsford Cathedral in January 2012.