Arena Essex: Sonny is the man at Banger Final 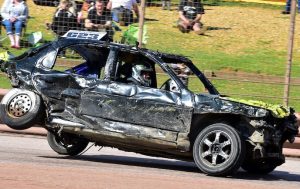 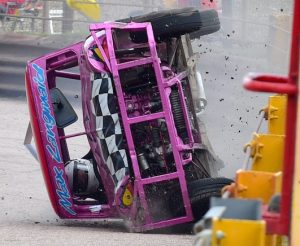 Douglas crossed the line first in all of the races during the afternoon, but in his eagerness to get to the front of the final, which carried automatic qualification into the National Banger World Final in September, he jumped the start, passing a couple of cars before the green flag had waved. He was docked a place at the end of the race, promoting Sherwood, whom he had passed at mid distance.

A number of visitors made this a much livelier affair than had been feared. Team Little Charlie’s, headed up by recent Caravan race visitor, Wayne Boland, Curtis Salvage and Ricky Pullen as well as The Badgers team from Wales, were certainly up for a crash and went up against The local TMT team straight from the green flag of heat one.

Pullen attacked TMT’s livewire, Ricky Hutton, before Boland did the same, Hutton carrying on despite a wonky wheel or two. Somehow Hutton managed to latch onto the back of Salvage’s car and followed him hard into the pit bend wall, an attack which motivated Boland to travel the back straight the wrong way to hit Tony Hutton head on. As Boland looked to launch another attack, Matt Butcher clipped him into a spin and Boland took a series of heavy hits from Ricky and Tony Hutton, then Matt Butcher, before Ricky Hutton took another lap run up to finish him off!

Having survived another Ricky Hutton attack in heat two, Pullen later found himself followed hard into the turn one wall by Matt Butcher.

The three wheeling Hutton then caused more chaos in the final, turning around to strike Andy Swift, Swift then turning around and dishing out a massive revenge hit.

If we thought that would finally silence Hutton, we were very wrong as his badly crippled car returned to the track for the Destruction Derby and he took part in an entertaining battle with brother Tony and Matt Butcher, all three combining to finish the challenge of Ricky Korpiela, with Butcher finally outlasting both Huttons.

Luke Oliver won the Stock Rod Essex Championship, getting ahead of pole-sitter Dave Crouch in the early laps. Oliver drove a steady race, sticking rigidly to the inside line whilst Wayne Shackleford also demoted Crouch but didn’t really look like he was ever going to get past the dominant Oliver. Meanwhile there was heartbreak for Robert Taylor who rolled his car during pre-meeting practice and was unable to take to the grid.

Phil Wise took heat and final success in the Stock Cars, surviving a last bend attack from both Alfie Jones and Darren Nash in the final. Nash spun in his efforts and crossed the line in third and in reverse gear!

Finally there was a small Mini Stox entry but three great races with David Shearing and Aaron Totham the class of the field. Sam Bennett nearly clung onto the win in heat one but was attacked by Totham on the last corner, both cars running wide allowing Shearing to nip through and take the win. Heat two was interrupted by a rollover from Max Langmaid, who was the victim of an attack from Josh King. Someone well used to what a rollover feels like is Abbie McGuiness, who’s much publicised high flying rollover last time out, was forgotten with a fresh roof welded on her car and a third place finish in this restarted heat behind Shearing and Totham. After two Shearing victories, Totham was not going to be denied in the final, although he only just managed to squeeze between the lapped car of newcomer James Willis and the fence as he took the flag.

The next action at Arena Essex is on 13th August when the inaugural World Series Final takes place for the Micro National Bangers. Series leader, Bradley Lee will start as the favourite for this one, but the race could well descend into something of a lottery with crashers laying it on the line on every turn. The Lightning Rod Essex Championship and Mini Stox provide support at the usual start time 1pm.