ALAN Layfield, a waste operative who manages the Grays High Street and surrounding areas, has been thanked and congratulated after his quick thinking saved a local house from going up in flames. 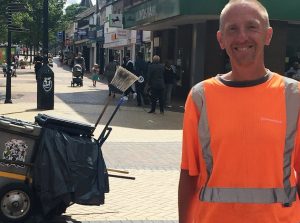 On Monday (31 July), during Alan’s usual shift and usual rounds, he spotted smoke coming out from an upstairs window of a house in Bedford Road in Grays.

He explained: “As I got closer to the house, the smoke thickened and I called the Fire Service straight away.

“While I waited for them to arrive, I banged on the doors. My first thought was that somebody could be inside.

“After there was no answer, I knocked on the neighbour’s door. The person in the house opposite managed to call the owners phone to let her know.

“The fire service and police turned up quickly after and a crisis was averted.”

Mr Layfield, who celebrated his 47th birthday last week with a small surprise party from his team, claims he is no hero.

He said: “I did what anybody else would have done.

“I didn’t do anything extra – I was just in the right place at the right time.”

Mr Layfield takes extreme pride in his work, with his father serving in World War Two, he proudly explained how he took an early shift that Monday to ensure the War Memorial in the town centre looked its best before the Passchendaele event later that day.

“Although he won’t agree, he absolutely went above and beyond in his work and saved a family untold stress and damage through his determination and quick actions.

“It is right that we recognise him publicly – he totally deserves it, my thanks and appreciation go out to him.”