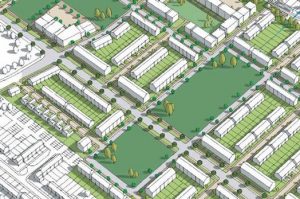 AVELEY start a new chapter in their history tomorrow evening as they play their first game at their new Parkside home. Dulwich Hamlet will be providing the opposition and Craig Johnson, the Miller’s secretary who has worked tirelessly to get the new ground from idea to final completion, is hoping for a big gate and went on to say; ‘It will be our first game at the new venue, but some neutrals may wait until we play Bowers & Pitsea on Saturday 12th August in the opening fixture of the Bostik North as that would be our first competitive game at the Parkside. The bar has already had a trial run, when we had an open training session and we had about one hundred people turn up’,

Aveley left Mill Field at the end of last season, leaving their home since 1952 to move a few hundred yards down the road where a new £4.8 million state-of-the-art stadium awaits. The Millers will be playing their games on a 4G pitch, in a stadium that has a capacity for 3,500 spectators, offering seating for 480 and also utilising the latest LED floodlighting system.

The new facility will also have a full size grass pitch beyond the main ground, as well as 7 v 7 and 9 v 9 training pitches. Aveley are already benefitting it seems from moving to their new base as Johnson told me that; ‘this season the Millers will have 22 youth teams, an academy starting in September, along with another men’s team that will be playing in the Mid-Essex League.’ It looks like exciting times could be ahead for the Millers. Aveley very nearly brought the curtain down on Mill Field with a play-off spot last season and will no doubt be hoping their new stadium gives them the base from which to launch a challenge to get into the Bostik Premier.

The Millers have one further pre-season game at Parkside arranged on Saturday, 4th August against Harlow Town. That one kicks off at 2pm, allowing their tenants Grays Athletic time to fit in a warm-up against Sittingbourne at 4.30pm. Admission prices for both games are £8, with concessions at £5 and £2.