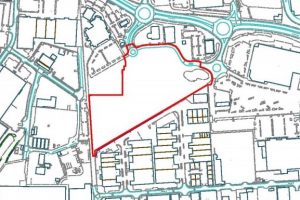 The submission for housing on the land east of Euclid Way and south of West Thurrock Way followed on from a 2015 decision by the council to grant outline planning permission for the development of a wider site including a superstore (which was earlier earmarked for Morrisons), restaurants and houses.

Agent for the applicant Bellway Homes, Catherine Williams, spoke to councillors of the planning committee about the application.

She said: “The development will deliver a high quality contemporary residential scheme together with an area of open space and improvements to the existing pond onsite, which will create an attractive entrance feature.

“The proposals fully accord with the prevailing planning policy framework and will assist in meeting the council’s identified local housing need.

“The design follows extensive discussions with officers over the last six months which has informed the design approach, material pallet and proposed appearance of the properties.”

She added that the plans would exceed the necessary car parking standards required and there would be a bus route included in the application.

The application marks the first phase of housing development at the site and councillors said they welcomed the proposals.

Cllr Gerard Rice said: “This is to be welcomed. Lakeside now is a town and we are going to see residential development within our new town. It’s near a railway station which is good and we’re going to get a hopper service and a food store as well. The only thing that’s missing will be the charging posts for the new electric cars!”

One Response to "Plans for new housing close to Lakeside approved"