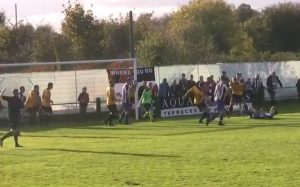 EAST Thurrock United were held to a draw at the first game of the season.

An entertaining game at the FutureFuel Stadium saw both clubs share a point in a 1-1 draw in the opening game in the Vanarama League South.

Montel Agyeman had a dream debut for the Rocks as he scored to give his new team the lead, only for Michael Kamara to level things up with a penalty.

James White and George Allen were also handed debuts, with Lewis Smith and Max Cornhill also back in the team, having re-joined the Rocks after spells elsewhere.

A quiet opening saw Ryan Moss strike a volley off-target for the visitors who also had claims for a penalty turned away by the referee.

The Rocks however soon put together a face-paced counter attack as Agyemang, Sam Higgins and Kye Ruel all got involved in the play that ended in Ruel having a shot parried by Sam Howes.

The action though was soon up the other end and Lukas Lidakevicius had to use his fingertips to push Max Kretzschmar’s free kick onto the bar.

The Rock took the lead soon after the interval when a weighted cross towards the far post by Reece Harris was met by Agyemang, whose slide towards the ball was enough to divert it past the keeper.

The lead lasted only eight minutes after Cornhill outstretched arm hit the ball and the resulting penalty was struck straight down the middle by Kamara to level the game.

Another fine Rocks move involved substitutes Harry Honesty and Ben Marlow, with the latter driving a solid shot off the woodwork. Cornhill also placed a header over in the closing stages, meaning that both sides had to be content with starting their campaigns with a point.