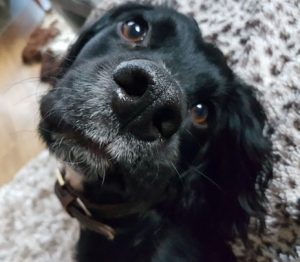 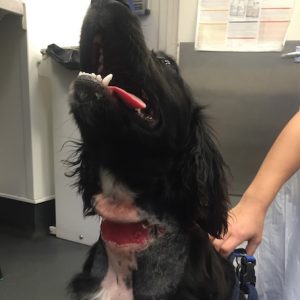 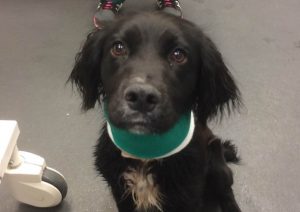 A cocker spaniel puppy who was rescued by the RSPCA after he was found suffering with a gaping open wound on his neck is due to star on the small screen in the Channel 5 Dog Rescuers show presented by Alan Davies.

Inspector Joe White from the RSPCA was called to a lane in Grays, Essex, in October (2016) and discovered little Guinness collapsed with one of the worst wounds the RSPCA inspector had ever seen – right across his throat.

RSPCA Inspector Joe White said: “Poor Guinness was in such a bad way when we picked him up. He had a huge open and infected wound on his neck. It looks as though he had been left with a collar on that was far too small for him and it had gradually cut in to his neck.

“The wound was gaping and looked as though his collar had gone the whole way round his neck.”

The black and white working cocker spaniel was thought to only be a matter of months old and he was rushed to RSPCA Harmsworth Hospital in London for emergency vet treatment.

Insp Joe White said: “I could not believe it – it was one of the worst wounds I have seen in my whole time as an RSPCA inspector. It was so deep and looked extremely painful. I have seen some awful things but this one really hit me.

“How anyone could neglect this poor puppy in this way and ignore such an awful wound that so obviously needed treatment is just beyond me. He is only around eight months old and so friendly and full of love despite everything he has been through. He didn’t even whimper when vets were treating him.”

Despite having a microchip – Guinness’ owners were never traced and the poor pup was only logged as ‘Puppy Number 2.’

Luckily for Guinness he has found a loving new home – after the family that were fostering him fell head over heels in love with him and adopted him.

Charlie Rees-Brown, from Grays, Essex, said: “The minute he walked through the door I just knew that he wasn’t going to be leaving the house because he just fitted in with the family just lovely.

“He is such a cheeky, happy boy you really wouldn’t know he had been through something so awful.”

Alan Davies said: “The Dog Rescuers goes behind the scenes to see the RSPCA at work rescuing dogs from neglect and abuse.

“It’s sad to see dogs suffering but always a joy when they are nursed back to health and find loving new homes.”

Guinness is one of 8,009 dogs rescued by the RSPCA last year – that’s nearly one every hour.

To help the RSPCA continue rescuing, rehabilitating and rehoming animals in desperate need of care please visit: www.rspca.org.uk/give or text LOVE to 87023 to give £3 (Text costs £3 + one standard network rate message).