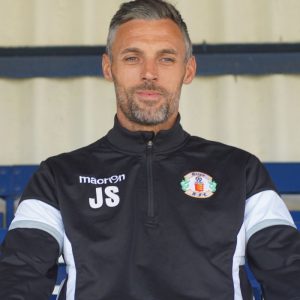 GRAYS Athletic manager Jamie Stuart was quite upbeat as he spoke to Your Thurrock about the season ahead. Whilst last season ended with a drop down into the Bostik North, the backdrop was the takeover of the club which meant that Stuart’s pre-season last time out saw him having no budget until August, meaning he lost players to other clubs. Training sessions were disrupted and the disarray played into Grays’s season.

Despite the relegation there were some good performances, such as the 1-0 home win over Billericay Town, and the amazing 2-1 win at eventual champions Bognor Regis Town.

Jamie Stuart said: “Last season the team needed consistency, which they didn’t always get. I had throw a lot of young players in at the deep end. I was pleased with some of the performances; the 4-0 away win at Hendon showing what the team were capable of when they fired on all cylinders. The season though did end in disappoint, no amount of twisting words can avoid that fact”.

The Blues boss however was in no mood to dwell on any of that. “I have had a perfect pre-season,” expressed Stuart: “we have a structure in place, we have training venues sorted. I have brought in Jamie Slabber and Barry Cogan, players I know, have a good relationship with and want to play for me. I’ve brought ten players in and players I wanted to bring in last year I have added this year.”

Some sources have already tipped Grays as being one of the favourites to go up and Stuart did say he would love to go straight back up. He feels last year Grays couldn’t compete but that this season they are more than able to. Having been a player during the back-to-back FA Trophy era it’s no surprise to hear the Blues boss tell me: “I love Grays Athletic, the club is close to my heart. I want the club to move forward and we now have a Reserve side, a youth section, and academy players. We had to take a step back to go forward. I’m positive that we had re-built, we went down looking to get back up.” The club are now fan-owned, with a new committee in place, meaning the club re-structuring has now become a going concern, allowing Stuart to be able to have the structure he needs in place to bring the success he wants to bring back to the Blues.

The Grays gaffer isn’t complacent though, telling me that in football: “You get out what you put in. Players need to graft, chase back. Success comes from structure, shape and guidance. We will take each game as it comes. There’s some useful teams in the Bostik North, plus a few local derbies.”

Stuart sounds ready to let his team lose. “I am in a good place at the minute. With no injury worries and the rub of the green I am positive we will be there or there abouts by the end of the season.”

Grays start the season with a local derby at Tilbury. They then host AFC Hornchurch on Wednesday 16th August. Bank Holiday Monday sees another local derby when Grays welcome landlords Aveley to their own Parkside Stadium.