Boro boss looking to do a lot more than just survive. 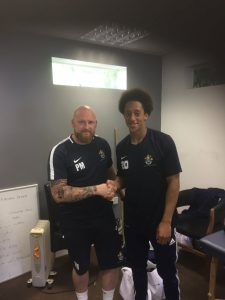 Having spent the previous few days getting the kit and tracksuits ready by doing the printing himself, it was time for Paul Martin to reflect on the season ahead and what he hoped to achieve from it. Martin will be operating without a budget yet again this term and whilst survival is always a priority he always aims higher than that. “I’m looking to go and upset the league. If we can get in the play-offs one year, without having a budget, it wouldn’t be forgotten,”

Romford have survived for the last eight seasons without a budget and have been able to keep themselves in the Division because of a togetherness that Martin feels isn’t at other clubs. He has no stress despite the lack of budget because he has no pressure. “If we can come higher than teams that have a budget then we have done well.”

Romford will need to replace the goal scoring talents of Chinedu McKenzie, whose twenty nine goals last season brought him to the attention Maidenhead United. Ryan Boswell is back at East Thurrock United; Ryan Mallet went and joined Bowers & Pitsea, leaving Martin with the job of holding open trials to assemble a squad. “One hundred and fifty players have turned up at the open trials, if we like what we saw we invited them back and we are offering 18-20 year olds the chance of playing Bostik League football,” explained the Boro boss. If non-league football is about brining young men into men’s football then Martin is managing to meet that remit.

With only one team likely to go down this year, means that the Boro boss doesn’t feel too pressured about the drop, as he wants his team to believe in themselves and look to finish as high up the table as possible. “I have told the players that we should aim to keep ourselves in a good position till Christmas,” said Martin, who went on to add: “after then clubs tend to cut their budgets and lose some of their players. If we can stay in the top half of the table, and are only ten points away after the Christmas period then we could claw it back.”

Romford start their 2017/18 campaign on Saturday with a trip to Bury Town and then host Heybridge Swifts on Wednesday.