Battling Boro worth their point 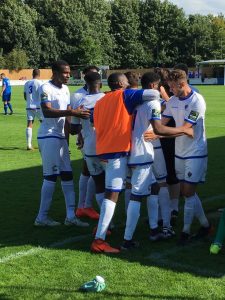 With five players making their first starts, and two more without a competitive appearance between them on the bench, this new-look Romford side came away from Bury with a well deserved point. But for two hair-line offside decisions that went against them in the second half, Romford could have been looking at a second successive win at Ram Meadow, although they had Michael Gooch to thank for keeping them in contention as the returning keeper made some key saves; none more so than from Darren Mills’s first half penalty.
Romford had slightly the better of the opening exchanges; Jamie Dicks, set up by Daniel Akande, could not get his shot away, but Jonathon Nzengo went close with one effort before being put through by Dicks and having his effort blocked by Tibbles in the Bury goal. Nick Reynolds was fouled in the follow up, earning Boro a free-kick, which Dicks fired over the crossbar.
The dangerous Darren Mills, who tore Boro apart last term when playing for Maldon & Tiptree, headed straight at Gooch after 17 minutes before firing another effort into the side netting shortly afterwards, but he was presented with a golden opportunity to put the home side ahead when they were awarded a penalty with 26 minutes played. Mills actually appeared to have fouled Gooch as they challenged for a bouncing ball, only for referee Adrian Sannerude to point to the spot for a foul by Tom Vickers in the build up. Mills struck his penalty well enough, but the Boro keeper flung himself to his left to push the ball away.
A cross from Liam Wales that found Mills forced another save from Gooch as the home side began to get on top. Gooch also saved well from a Bradley Barber free-kick, but Boro posed a threat on the counter-attack, with Nzengo curling one shot narrowly wide and seeing another deflected away for a corner.
The first half ended goal-less, but not without incident as both teams picked up two yellow cards, with Bury’s Jolland being the first in the book after just two minutes. His team-mate Liam Wales was similarly booked for kicking the ball away, while Boro’s Jamie Dicks and Hugo Atkinson were cautioned for fouls.
Bury had more of the play after the interval, but without creating too many clear-cut chances, as Tom Vickers and Danny Cossington repulsed most of the home side’s attacks. Bury’s best opportunity came from a long kick by Tibbles that ended with a shot that was well off target. A dubious offside decision stopped Boro’s Nzengo in his tracks as he looked to break clear just after the hour mark, but it was the same player, with his first Boro goal, that gave the visitors the lead after 72 minutes. Jamie Dicks floated a free-kick into the Bury penalty area, where the home defence made a hash of clearing their lines. The ball fell kindly to Jonathon Nzengo, who drove a fine right-foot volley into the bottom corner.
Nine minutes later the home side, who had been unable to turn their possession into anything clear cut in front of goal, equalised when Cemal Ramadan buried a low shot from the left side of the penalty area into the far corner. Romford substitute Olakunle Giwa then appeared to have got away from the home defence, only for the day’s second contentious offside flag being hoisted to deny him a run at goal.
There were plenty of positives to draw from this Boro performance, especially with so many new faces in the line-up. The point was the least they deserved.