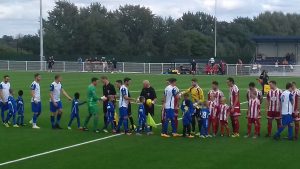 Three hundred and fifty-four people attended Aveley’s first competitive fixture on Saturday. Sadly the Millers were not able to baptise their new Parkside Stadium with a win and looking slightly overawed by the occasion, they only showed flashes of what they are capable of.

It looked bright for the hosts when Jordan Peart went on an amazing run, picking the ball up in his own half and then putting his foot down and accelerating towards the Bowers penalty box; he was disposed by Tom Hine just before he could fire off a shot, but it had been an early bit of excitement. Jack West nearly connected with a deep cross from the left, while Rhys Madden, making his debut in goal for Aveley, had to rush off his line to and remove a ball that was heading towards his penalty area.

After a reasonably bright opening the chances then dried up as both defences kept a tight guard. Jack Barry, another debutant, marshalled the Blues defence and headed clear a Bowers ball that was launched towards Lewis Manor. It was no surprise he has been made the club’s Captain this season as his tackling was often very solid, and he was dependable throughout. Martyn Stokes, the Bowers Captain was meanwhile commanding his defence which as much gusto, which starved the Aveley frontline of supply.

Christy O’Donoghue was able to carve out an Aveley opening after Ben Sartain dithered on the ball, allowing the Millers player to put in a tackle to steal the ball, lay it off to Peart, who quickly  fed it on to Gleed, whose shot was blazed over.

Aveley continued to press and a nice passing manoeuvre set-up Jake Gordon whose effort was stopped by Callum Chafer. Bowers called for penalty in the 35th minute when James Thomas went down after a challenge from Harry Gibbs; the referee however waved the claims away, rightly in my opinion, as Thomas had gone down very lightly and was perhaps luckily not to have been booked for stimulation.  A Jamie Salmon free kick for Bowers, after Jake Gordon had upended James Thomas didn’t cause Madden to much trouble as it was straight at him.

With the half coming to an end, a half-chance fell to O’Donoghue just before the break. The ball pinged about the box; fell kindly to the Aveley forward and his thumping shot was deflected by Martyn Stokes. The resulting corner was rifled over by Tommy Spillane.

Aveley had a shout for a penalty themselves early in the half, after an alleged handball in the box. The referee turned down the claims and play continued.

Bowers took the lead in the 56th minute when a precision ball from James Thomas by the left touchline fell into the path of Fahad Nyanja, who smashed it past Madden.

Stokes and Nyanja both chased down a ball over the top that Madden had to come and claim; the goal had lifted Bowers and taken the wind out of the Millers sails as they started to sit back and allow the visitors to pass it around. A Gibb shot in the 65th minute crashed into the side-netting, announcing to Bowers that maybe they were still looking to get back into it, but a minute later it was 2-0 to Bowers when Lewis Manor rose above his marker to head past Madden.

The Millers pulled one back four minutes later when a ball across the box was knocked back into the middle by Paul Preston, landing at the feet of Peart, who smashed it past Chafer.

Adam Bolle went close with a header. A long ball into the Bowers box from the foot of Gibbs nearly met the head of Adalberto Pinto; the Blues were now awake again and looking to get themselves back in the game.

However the visitors then went and restored their two-goal advantage in the 81st minute when Lewis Manor scored his second goal of the afternoon, once again a towering header that flew past Madden and effectively winning the game for Bowers.

One Response to "Football: Bowers spoil the Parkside party"