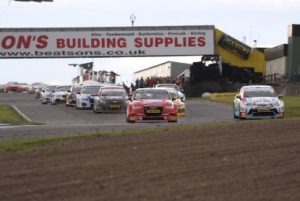 THE AmDTuning.com with Cobra Exhausts team secured another top ten finish from the latest rounds of the Dunlop MSA British Touring Car Championship at Knockhill.

The West Thurrock-based team made the long trip to Scotland eager to maintain the solid form displayed this season by the ever-improving Audi S3, with drivers Ollie Jackson and Ant Whorton-Eales confident of adding more points to their respective totals.

Lichfield racer Ant – making his first appearance at Knockhill since 2015 – secured his best qualifying result to date to start the opening race of the weekend from 13th spot.

Battling against a number of cars running the softer compound tyre, Ant would end the opening race in 17th place and then fought his way forwards to eleventh in race two – which had to be restarted after an early accident – with a solid drive on track for his fourth points finish of the year.

A post-race penalty for Josh Price then promoted Ant into the top ten for the first time and left him on pole for race three thanks to the reverse grid draw.

Running the soft tyre, Ant maintained the lead through the first lap but then dipped a wheel into the gravel at the Chicane on lap two when his Audi got out of shape – losing momentum and resulting in him taking a hit in the rear from the following car.

With bodywork rubbing on the left rear tyre, Ant was forced to return to the pits for repairs before rejoining two laps down; going on to produce a series of laps quicker than anyone else on track as he eventually finished 27th.

“The first two races this weekend were okay, but racing against cars on the soft tyre was tough as we knew that was the better rubber,” he said. “Going into race three, we’d made some set-up changes to the car and I felt confident that we could get a good result.

“After the first lap when [Tom] Ingram made a move and backed out of it, I thought that we had the pace to run at the front and I’d pulled a small advantage heading towards the Chicane.

“As I went to turn in, the right rear just snapped out a little bit and I went into the corner sideways but I managed to catch it and just dipped a wheel into the gravel. Unfortunately, I lost momentum as a result and got a hit from behind which meant I had to pit or we’d have lost the tyre.

“To be honest, I was so angry about the fact that we’d missed out on a good result that when I went back out on track, I just absolutely nailed it and in a weird way, what happened has been a good thing as it showed me just how much how I can push the car.

“The pace we showed after rejoining was absolutely mega and I can take a lot of confidence from that into the races that are still to come.”

Team-mate Ollie was left on the back foot after electrical issue in qualifying left him down in 30th place on the grid for the opening race.

Having taken the finish in 28th spot in race one, Ollie’s hopes of a strong result in race two were hampered by contact in the incident that caused the race to be stopped – which the team worked hard to repair for the restart.

Further contact when the race got back underway left him with an ill-handling car and resulted in a 19th place finish, with the Tamworth-based driver then forced out of the final race of the weekend after on-track contact and a gearbox issue saw him bring his car back into the pits.

“We missed a chance to score points this weekend,” he said, “but the problem in qualifying meant we were right in the middle of all the trouble for race day. We went a bit stiff with the set-up in race one and didn’t make the progress we’d hoped for and then in race two, there was yet more contact that there didn’t need to be that left me with a damaged car.

“At the start, I’d taken to the grass to avoid the incident ahead before someone simply ploughed into the side of my car and the boys did a great job to get the car fit for the race – only for the same driver to then hit me again and knock the handling out.

“In race three, we had a problem with the gear selector that meant the car kept slipping into neutral and unfortunately that played a part in me having contact with Will Burns that damaged the suspension and meant I had a retire.

“It’s a shame as we knew in practice that we had a quick car but we just weren’t able to show it.”

Team boss Shaun Hollamby admitted that it was a weekend of mixed emotions for his two drivers.

“For Ollie it’s been tough this weekend as he should have been in the top ten on the grid for race one which could have led to a totally different outcome on race day,” he said. “Sadly he found himself in the wars and wasn’t able to get the results he was capable of.

“Ant has done a good job and has led a race for the first time, and I genuinely think he could have been on for a really good result in that final race before the contact that saw him forced to pit.

“His laps when he rejoined were fantastic and I think he has learned a lot this weekend that he can take into Rockingham, where the Audi was strong last season. Ollie and Ant continue to work well together as a pairing and I feel confident that they can do a good job when we go to Rockingham for the next round.”