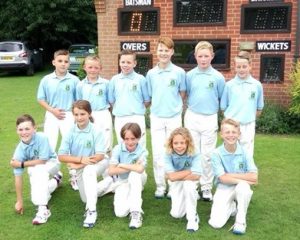 Belhus U12 Youth Tour of Norfolk

Belhus staged their 13th youth tour in Norfolk, a diversion from the traditional Sussex youth tours in seasons past. Based at the resort town of Hemsby, the tourists won all four of their matches played in a limited-over format and were fortunate to avoid the worst of the British weather.

Lewis Blake hit an undefeated 22 to provide Belhus with a slender two-wicket win after opening batsman Alex Winder laid the foundations with 16 runs. For the home side, Morrison and Wallbank picked up two wickets apiece, while in the Old Buckenham innings, Henry Overy bagged three wickets just five runs from three overs, Charlotte Waters collected 2-18 also from three while Winder and Blake picked up one wicket apiece.

With gathering storm clouds, this match was played in a T20 format. Alex Blake and Ryan Sims put on 28 for the first wicket, until Sims was bowled by Harrison for four runs. Blake went on to contribute 20 while his brother Lewis added 14 runs batting at number five. Henry Overy, fresh from his three-wicket haul the previous day, turned his attention to batting with a useful 25-run undefeated contribution. Harrison Cunningham and Silas Town picked up a wicket each for the hosts, but three tourists, Charlotte Waters, Robert Healy and Callum Constantine fell victim to run-outs, such is the hazard of run-gathering in T20 cricket. Mattishall were restricted to 78 in reply, with their innings being suspended for thirty minutes due to rain. Ben Gaskin contributed 25 runs, as Overy weighed in with 2-7 from two overs, Alex Blake finished on 2-6 also from two overs, while Tyler Robertson and Constantine earned themselves a wicket each.

After a scheduled rest day, the young tourists turned in their best batting performance of the tour in the village of Postwick. Lewis Blake and Teddy Waters added 18 runs for the first wicket which led the way for Alex Winder to hit three boundaries in an impressive innings worth 17 runs. With the Belhus score on 59 for the loss of five wickets, Alex Blake joined Robert Healy and these two added 74 for the sixth wicket, Healy scored 22 while his partner struck a majestic 32 which included five boundaries. Pinch was the most successful Norwich bowler with two wickets for just three runs from two overs. Keiran Binney and Ollie Harvey collected one wicket each. At the close of the Belhus innings, the two undefeated batsmen were Henry Overy and Tyler Robertson with 14 and three runs respectively. After tea, the hosts had Barber and Cooper to thank for the middle order contributions of 37 and 31, but the tourists held their nerve as Sammy Fairweather impressed with the ball. He might not have taken a wicket but produced a good spell of seam bowling which cost only thirteen runs. Wickets were taken by Charlotte Waters, who clean bowled opener Brister in her first over, Callum Constantine, Henry Overy and Lewis Blake.

The tour party returned to Essex for their final match at Halstead’s Star Stile venue. Ethan Barnett struck three fours in a confident innings of 15 runs, while Teddy Waters was undefeated at the close of the innings with 18 runs to his name. Sally Winter of Belhus guested for Halstead and promptly took a wicket with her first delivery. Waters completed a fine all-round match with 2-8 from two overs as did Alex Blake. There was also one wicket each for Sammy Fairweather, Ethan Barnett, Callum Constantine and Charlotte Waters. Tilly Barnett also bowled well, her spell cost just eight runs.