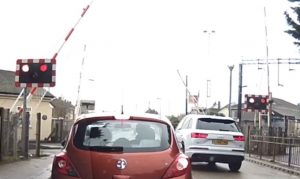 A MAN has been sentenced to eight weeks in prison, suspended for 12 months, after driving a motor vehicle dangerously on a level crossing in East Tilbury.

Kamaran Baig, aged 40, of Ilford in Essex, pleaded guilty to the offence at Basildon Magistrates’ Court on 20 July.

He was sentenced at the same court hearing to the suspended prison sentence, and ordered to complete 150 hours of unpaid community work within a 12 month period. He was fined a total of £205 and disqualified from driving for 15 months.

On 7 February this year, Baig drove his car along Princess Margaret Road in East Tilbury.

He approached the railway level crossing, overtaking two vehicles which had come to a stop because the crossing had been activated with flashing warning lights and audible warning sounding.

PC Arron Hurley said: “This sends a clear message to drivers that failing to comply with signals at railway level crossings is extremely dangerous and can put lives at serious risk. Not only did Baig put himself in danger, he also put other road users and passengers on board train services at risk as well. I welcome the decision by the court to issue the defendant with this punishment and hope that other drivers realise the severity of this offence.”