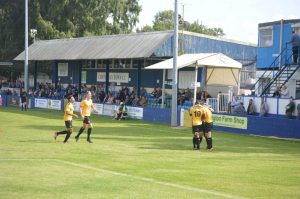 Two goals from Lewis Smith helped The Rocks snatch a point from a spirited Chippenham Town.

Two goals inside five second half minutes helped the Rocks get back into a game that looked beyond them at the break.

Chippenham clicked in to gear and it was no surprise when they took the lead via Andy Sandell, who picked up a good ball from David Pratt and his swerving shot sailed past Lukas Lidakevicius.

The hosts didn’t rest on their laurels either and could have gone further ahead before Will Richards headed past Lidakevicius in the 35th minute.

While it may have been a bad opening 45 minutes for East Thurrock, they made immediate amends, pulling one back inside the first minute of the re-start, with Smith firing a shot into the bottom corner of the net.

And within five minutes the bad performance of the first half was well and truly expunged as Smith, scored his third goal in two matches to level the game up.

The hosts however almost re-took the lead when Jake Andrews went close with a header that skimmed the post.

Smith, having salvaged a point for the Rock then very nearly completed his hat-trick, with only a top class save from Jared Thompson, halting what would have been an amazing Rocks turnaround.

In the end it was heroics from Lidakevicius who was equal to the late pressure the hosts plied on the East Thurrock goal, ensuring that the Rocks were able to continue their unbeaten start to the new campaign.