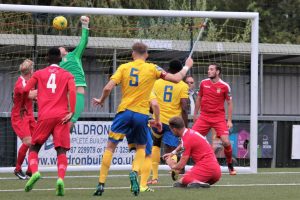 AFC Sudbury welcomed fellow Bostik League Division One North side Aveley to South Suffolk determined not to come unstuck in these the early stages of the famous old competition. There were a few tweaks from manager Jamie Godbold from the side which drew 1-1 at home to Canvey Island last weekend and were drawing 1-1 when the midweek fixture at Maldon and Tiptree was abandoned following floodlight failure. Ironically, Aveley were due back at Sudbury on league duty in a fortnight’s time, the date of the First Qualifying Round on September 2nd, so that game must now be rearranged.

Aveley kicked off the game with A.F.C. Sudbury attacking left to right as viewed from the Brian Tatum Stand. After a bright start from the visitors, A.F.C. Sudbury settled well and won a free-kick in a central position on eight minutes. Jake Turner and Dave Cowley stood close to the ball with the former striking the it against the wall.

On twelve minutes Joe Claridge swept a superb ball along the left wing intended for Rhys Henry who was unlucky not to be able to make a telling contact. With eighteen minutes on the clock Paul Walker’s rapid clearance from a rare Aveley foray forward saw Louis Blake hit his shot against Rhys Henry before the ball fell kindly to Jeremiah Kamanzi whose shot just cleared the Aveley crossbar.

On twenty-four minutes Jake Turner sent a speculative effort wide of Rhys Madden’s right hand post as the home side began to dictate possession. A minute later and Adam Mills sent his effort from twenty yards over the crossbar with the strong wind at his back perhaps adding a little too much ammunition to his strike.

A.F.C. Sudbury grabbed the lead on twenty-seven minutes. Rhys Henry delivered a superb right wing corner which was met with a firm header by Julian Smith in a central position and the ball flew into the net. The bustling Jeremiah Kamanzi was fouled by Jack Barry who found his actions receiving the referee’s first yellow card of the afternoon. Adam Mills stepped up to fire the set-piece over the crossbar as the home side continued to control possession with an organised, confident defence and a patient passing game.

Six minutes from the break Jeremiah Kamanzi sent a stinging effort towards goal which Rhys Madden rose to tip over the Aveley crossbar with superb agility.

Sudbury took a real grip on proceedings when they added a second with three minutes of the half remaining. Tyler French snuffed out a dangerous Aveley attack and the ball was quickly processed upfield into Adam Mills who again found the net at the King’s Marsh when his deflected shot looped over the unfortunate Madden and dropped into the net. Frankly it was no more than the home side deserved for their patience, industry and highly effective defence.

Two minutes into the half Jordan Watson, one of two Aveley half-time substitutes, broke free in the home penalty box, but his shot cannoned off the crossbar and was shepherded behind for a goal-kick.

This could have revitalised the Aveley effort and been a turning point, but the ball was cleared away and Sudbury could build once more. Joe Claridge sent another fine ball into Adam Mills who slid the ball home, but unfortunately he had been flagged for offside.

The game was effectively sealed on the hour when Dave Cowley’s sublime free kick was curled over the wall to ripple in the back of the net with Aveley  keeper Madden able only to admire its impressive trajectory.

A sixty-seventh minute Sudbury goal was ruled out for a foul on Rhys Madden as the hosts continued to show little mercy to their visitors. The reprieve was short-lived however. With twenty minutes remaining another Sudbury attack saw Louis Blake rise at the near-post to glance a header into the path of Alfie Carroll who thundered his shot past Madden from the centre of the penalty area.

This signalled a chance for A.F.C. Sudbury to make some changes and they went big with three in one sitting. Jake Turner, Louis Blake and Adam Mills making way for Tevan Allen, Jack Newman and L’Heureux Menga.

With a quarter-of an hour remaining, a beautifully-delivered Joe Claridge free-kick struck the side-netting and Menga’s brief appearance caused a few very difficult moments for the Aveley defence in the closing stages as the home side threatened more goals.

Four nil it remained however, a fine performance by A.F.C. Sudbury with some excellent goals, and, from start to finish, a patient and pacy passing game which laid down a marker for the weeks to come. The defence looked very solid and were brilliantly led by Tyler French whose coolness on the ball and in the tackle was faultless.