FORD is the latest car company to launch an incentive for UK consumers to trade-in cars over seven years old, by offering £2,000 off a new model.

Unlike schemes by BMW and Mercedes, which are only for diesels, Ford will also accept petrol cars reports the BBC. 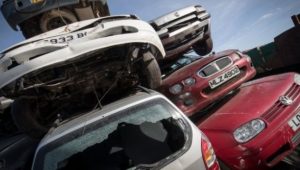 All of the part-exchanged vehicles will be scrapped, Ford said, which would have an “immediate positive effect on air quality”.

Old cars, from any manufacturer, can be exchanged until the end of December.

“Removing generations of the most polluting vehicles will have the most immediate positive effect on air quality, and this Ford scrappage scheme aims to do just that.”

The cars that can be traded in include any built to emissions standards that applied before 2010.

Vauxhall ran a similar scrappage scheme earlier this year, as well as in 2015 and 2016.