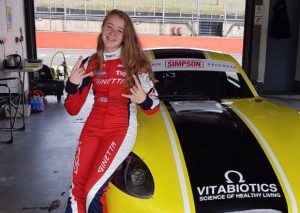 CHAMPION Karter, Emily Linscott, will compete in her first ever car race on Saturday 26 August 2017 at Rockingham Motor Speedway, driving the Ginetta G40 Junior GT car for Elite Motorsport, exactly one year after her first ever MSA Kart Race.

Having only stated in corporate hire karts at the beginning of last year, Emily, already a Champion and multi award winner, has now earned her place on the grid of the Simpson Race Products Ginetta Junior Championship, supporting the world famous British Touring Car Championship, for the remainder of the season. All her races will be televised with the Sunday of each of the rounds being broadcast live on ITV4.

Emily says, “I’m very proud of what I’ve achieved in such a short space of time but now I’m up against some very accomplished drivers, the best junior drivers in country, so these first races will be for learning as much as I can and gain the valuable experience I’ll need to be competitive for a full season next year. I can’t wait to get out there in the car alone, it’s going to be so much fun! Being scouted and signed to Arden’s Young Racing Driver Academy (YRDA) was a very proud moment for me and I’m now working with Race Driver Developments (RDD) too, so I’ve got a lot of good people behind me now too”.

The three rounds she races this year are Rockingham 26/27 August, Silverstone 16/17 September and Brands Hatch GP on 30th September/1st October where she will compete in a total of nine races, three races at each meeting. Emily’s partners; Vitabiotics, Sargeant Partnership, Handpicked Commercial Interiors, Dirtyslate Creative Studio, Ropelet, Everyone Active, iQComms are all working hard and doing their but to ensure she gets into a competitive team. Basildon Council have also proudly supported her efforts throughout the year too.

Her speedy success doesn’t come without hard work. She’s training twice a week at the Everyone Active Gym in the Basildon Sporting Village, she’s trains at home, she tests on track and in a simulator and has to think about her nutritional diet too, balanced with all of her school work, it’s a lot for a 14 year old to take on, but she’s loving the challenge and is up for it every step of the way. Why not find her on social media and send her a good luck message, she’d love that.