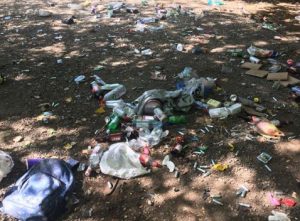 THURROCK UKIP has expressed anger at being “airbrushed” by Thurrock Council in a press release in illegal raves in South Ockendon.

For the last three months, the UKIP councillor for Aveley and Uplands, cllr Luke Spillman has been working on a number of strategies to address the problem of the raves that take part in the Davy Down woods and beyond.

So when Thurrock Council issued a press release on the action they had taken in partnership with Essex Police, it seems to have incensed the councillor and his party.

Cllr Spillman said: “As someone who has been communicating with residents, the police and the organisers of the events I’d like to clarify the following:

1. Bar one community officer, all the police have done is turn up to some of the events, decide they don’t have the officers to do anything and have then left.

I don’t blame the police. They simply do not have enough resource to hire enough officers.

2. As far as I am aware the council have done nothing. Apparently they nearly sent an officer to one of the events but their car broke down.

3. According to the information I have received from the police not all of the events were organised by the same group. The action taken by the police was against the organisers of three of these events.

4. According to the last information I received from the police, the group who have received the order always cleaned up after their events.

The clean up costs were incurred after events organised by as yet unknown individuals. As far as I am aware the statement regarding legal action to recoup these costs is simply not true. No money will be recouped because no one had been identified to recoup money from.

“This council statement is strong on rhetoric, bluster and posturing but very light on accuracy.

The Aveley councillor’s concerns were echoed by UKIP spokesperson cllr Jack Duffin, who, on a number of occasions, has taken the council to task over their communications.

Cllr Duffin said: “This, yet again, goes to show that TBC stands for the ‘Tory Broadcasting Corporation’ rather than ‘Thurrock Borough Council’. I wish the Council put as much effort into improving Thurrock as they do into creating party political spin.

“Unfortunately all their effort since the Tories took the Council has been focused on turning Thurrock into the FAKE NEWS Captial of Local Government.